1. Woodstock happened.
2. Get Smart and Laugh In were the two top TV shows.
3. Neil Armstrong walked on the moon for the first time.
4. Midnight Cowboy won best picture.
5. Hurricane Camille landed ... one of the most destructive killer storms to ever hit the U.S.

11. I failed a Psychology exam

I know what you are saying ... the last one is the worst. Right up there with the Manson murders.

I was stressed the night before ... tired and worried about how I was going to do in the exam. One of my neighbors showed up at my place the evening prior to my exam. I told him how tired I was and afraid that I wasn't going to be able to pass this test. He took two black capsules from his pocket and told me to take these to "help me study longer". I refused ... he insisted ... I refused again ... he insisted again ... so I took them from him, saw him to the door and said good night.

Keep in mind it was the age of experimentation. My group of colleagues in the "Arts" would have told you that experimentation was the key to growing the spirit and the mind.

In truth, they just wanted an excuse to get stoned.

I put the pills down and started studying again. Two hours later, I woke up (realizing that I had slept through chapter 6). I panicked. I looked at the pills. I never took pills and wasn't sure what these would do. I called him and he assured me these were safe and fast acting.

I trusted him ... after all I had known him for a month.

So I took the pills and soon I felt like I was king of the world. I knew all the answers. I breezed through the chapters ... reading and understanding facts at the speed of light. I wasn't tired at all. I never slept. I worked until it was time for the exam.

I saw him as I ran through the hallway ... hearing him mumble something about "speed". I didn't pay any attention. I was ready. 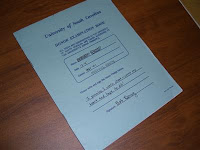 I remember getting into my desk in class and taking out the "blue book". It was the standard exam notebook in those days ... bound sheets of lined paper that students used to write their answers.

There was one question ... just one. I knew the answer. It would take me ten sheets to answer but I wrote furiously and finished in record time. I closed my book. The professor came around and picked up each one. When he came to me ... I just smiled and handed it to him. Then I looked at my desk ... and my heart sunk.

You are too funny.:-) I will admit I got high only once on the way to college class and accomplished nothing that day. Thank God I did not have a test! Figured I'd leave the getting high until the weekend. Keep writing. Fabulous.