I try not to watch the news any more.

Oh...  I'll listen to a podcast now and then. Certainly, Debbie will keep me informed about all the really important things happening around town ... like what a good deal she got at Sam's Club on peanut butter or why the lawn people didn't show up on Friday or the rain percentages for mid afternoon.

Ted Lasso is a GREAT TV series that airs on Apple TV+ and could not have come at a better time. Jason Sudeikis created Ted, a cheery football coach with a goofy moustache from Kansas who is recruited to coach a soccer team in England. It’s a sport he never coached and never played. It would be like putting Andy Griffin in charge of Scotland Yard. The reason he was picked? The owner of the team is the ex wife of the former owner and (just like in the film “Major League”) she wants to LOSE every game to destroy her ex husband’s first love.

Ted Lasso is ridiculed for his folksy demeanor by the fans and the press and the players. Every day he faces an impossible task ... to create a winning environment with a team that has no respect for him at all. And through it all he remains POSITIVE. He has an undying spirit and smiles every day. He is never negative and always sees the bright side to the worst situations.

Sudeikis could have played this part like a slapstick buffoon ... just for laughs, but instead took the high road. And boy does it work. It makes you laugh out loud and shed a tear or two at the same time. 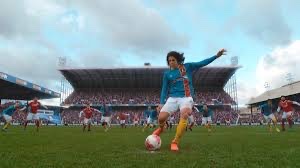 The opening show on Season 2 starts with a penalty kick from his best player. As he strikes the ball, the greyhound mascot Earl slips out in front of the goal to chase a bird. He is hit by the ball and killed.

In the press conference that follows, one of the cynical newsmen asks Lasso, “So do you have any comment about Earl, the greyhound?"

Ted pauses a few minutes and says, "You know when I was a kid, a neighbor's dog attacked me. It was pretty bad, my mom told me. I was too young to really remember. Well, years later, my neighbor passed away and I helped out around the house. I walked and fed the dog ... took him outside and played catch. The next couple of years the other spouse passed and there was no one to take care of the dog. This was the same dog that attacked me when I was little. But I decided to take the dog and care for him because there was no one else. He lived a long life until I had to put him down when he was older. You know ... funny thing about life. The things that you hated years before ... you hate it more when it's not there any more. Well sir ... I just hope our mascot Earl and him are running around in heaven just as happy as ever."

Ted Lasso works. It's a series that is such a great reminder that good guys DO finish first and that kindness can in fact create winners. There are better ways to lead your life and treat others.