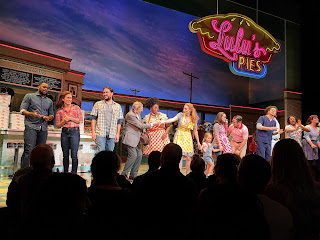 On our last night in New York, with the temperature dropping to 11 degrees, we shuffled into the Brooks Atkinson Theater to see Waitress.

Very cool show. Jason Mraz was in it and was a surprisingly good actor. The music was good and the cast was very talented.

But truly, the guy who stole the show was an actor named Christopher Fitzgerald. He played the boyfriend of one of the waitresses and was so funny that he had everyone in the theater laughing so hard,