In My Mind I'm Going (Crazy) in Carolina 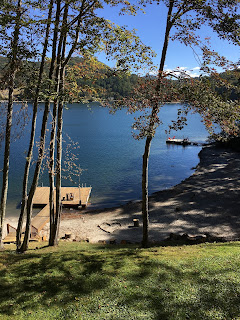 Flew to North Carolina on Thursday to spend a few days with the Gallagher sisters and all us tag along spouses. Debbie and Dennie have birthdays on October 19 and really wanted to celebrate at the Masterson cabin in Lake Glenville ... but because that weekend we'll be at a football game in New Orleans ... we decided to celebrate this weekend instead.

Started out at St. Pete Clearwater Airport and wound up in a remote parking area that we didn't knew existed, waited in multiple lines of confusion, were shepherded into the only security lane open and finally settled into our seats on Allegiant Air to Asheville  ... in other words ... business as usual. Actually, from there it was pretty uneventful. Rented a car and drove about an hour to the cabin and didn't get lost once!

It's truly a beautiful spot. 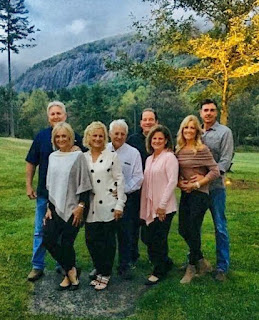 Nestled in the mountains, Tom and Dennie's cabin sits high above Lake Glenville and is big enough to accommodate the eight of us very comfortably.

By the way .. the family shot was taken a few miles down the road at a restaurant called Canyon Kitchen last night. Good food ... even better atmosphere. Three or four bottles of wine later, we all hopped on the couch back at the cabin while Tom introduced Keli to Blazing Saddles on DVD. She hadn't seen it or heard of it so Tom thought that it would be a good idea for her to enjoy one of the top classic comedies of all time. Not a good plan. Forty eight questions later (I don't get it ... why is the Indian speaking yiddish? Okay ... so I think I understand the story. They are in a town right? And he's a bad guy ...? Why is Mongo tied up? This isn't very funny.) we finally all passed out from exhaustion. 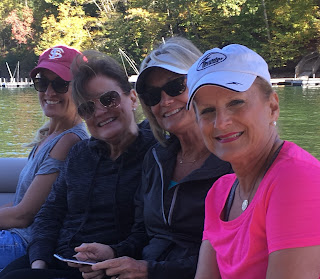 This shot was taken on our pontoon trip around the lake.

I focused on the sisters because of the long discussions about "where were you when ...?" I think we probably all do this when we get older because we suffer with CRS disease. The lengthiest was "where were you staying when sister Patty got married?" Steve patiently steered the boat back and forth in front of the cabins that were the site of the wedding and apparently the accommodations. "I stayed there ... no you didn't ... it was a duplex ... I think it was actually over there ... really? I remember that site ... and so on.

We also tend to repeat ourselves alot. Lee mentioned that she downloaded 135 pictures no less than 5 times at the kitchen table one morning. Keli played that ANNOYING song SONOFABITCH at least a thousand times. Thank heaven one morning Mark and Steve blasted it in her ears when she was sleeping. That stopped her for a few hours. 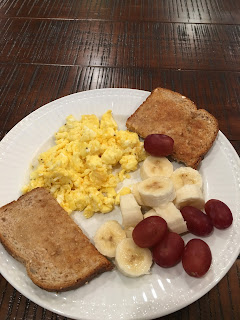 Even breakfast came with some playful insults.

Debbie made me scrambled eggs yesterday and her sisters lambasted her for doing this. "You make your husband breakfast?"

Steve asked me to take this picture and send it to him so he would know what at home breakfast looks like and also show it to Lee as a guide. 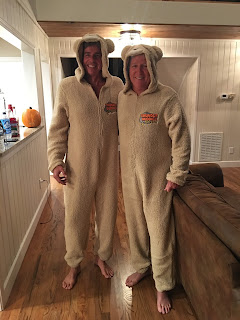 Well Mark got a couple of Thunder Buddy sleepers at WALMART on the way in and modeled them with Steve. 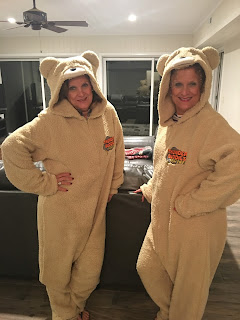 Keli was in the background of course playing SONOFABITCH ... Arrrrgggghhhhh. 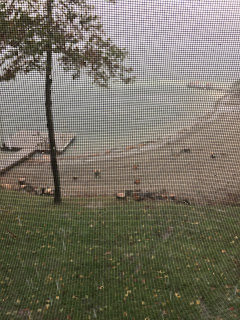 Apparently the Thunder Buddy gods were unhappy because it's been raining today ever since!
at October 08, 2017