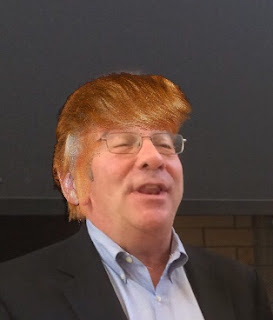 I've decided to run for President.

Don't worry. I'm not going to win, and even if some miracle I did ...and I survive being struck 5 times by lightning ... I probably won't serve. I just want to walk around with the hair for a while: The Trump hair.

By the way, I DO have a campaign platform that I will promise to achieve. It's simpler and much better than Donald's or Hillary's or Bernie "Larry David" Sander's. It's better because it is what people really want, and let's face it ... if they don't I really don't care because it's what I want (works for The Donald right?):

1. I will do nothing Presidential.

That's right. Be not afraid voters, I know that I have no idea how to run a country. I know nothing about all the intricacies of foreign policy. And I can't fathom how to get the House and Senate to play nice.

So ... unlike these other candidates who have all the answers and will undoubtedly make things worse, I'm willing to let the people who head up the military and the House and the Senate and the foreign service do their thing. What's the worst thing that can happen? They screw it up?

Are you kidding? All those people who come in and out all day checking out your office and your bedroom and steal silver and try on your underwear? OH YES THEY DO. It's just not reported.

No way, I'd live on some cool island. We have the internet, people. And cell phones. If somebody blows somebody up or Donald shoots a voter on Park Avenue ... nobody cares. Anyway, I can call the whole world on the telephone and they will take my call. I'm the President.

3.  I will only meet with people that have a brain or I like.

Life is too short to hang out with people you don't like. Those people will still do whatever they want whether they meet with me or not. Smart people are more interesting and because I'm President, I automatically fall into that category whether I'm interesting or not. So ... I could call Billy Joel and ask him to show me couple of licks on the piano. Or I could have Peyton Manning come over to play catch. Or I could host SNL. Or I could have dinner with Kate Upton or Sophia Vagara ... I'm sure both are great conversationalists. Debbie? She won't mind ... she'll be dining with George Clooney and Brad Pitt.

Know what? Maybe this President gig isn't too bad. And then when you serve your term and  become a former president you are suddenly much more popular and wealthy than when you took office. Crazy huh?

All I need is a billion dollars to start ... anybody know how I can reach Michael Bloomberg?