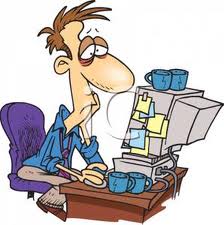 You know... ever since I've been writing this "humor" blog, I've noticed that I have lost most of my friends, my kids don't talk to me for fear they will appear in print, I've gotten hate mail from friends of friends and my wife doesn't even read it any more.

The good news is ... strangers love me.

Today I decided to be the kinder, gentler soul that the strangers love and those close to me have apparently forgotten. I'd like to award some special awards to those who read my blog and some who have even appeared:

Favorite Remodeler: That would have to be Debbie ... who has made a second career in this field. We have been married for about 12 years (she can't remember either). Eleven of those have been in houses that have been partially renovated ... although I always thought they were finished. Note to Debbie: Yes dear ... you are my best friend.

Favorite First Person I Thought Of: I hired Stephanie Hall 256 years ago at All Children's Hospital as my secretary (I promoted her quickly after she had a melt down over my messy desk). The running joke here was that she always thought she was my second choice because I interviewed some other girl who I barely remembered (great legs!).

Favorite Offspring: Oh yeah ... you think I'm crazy? Standard answer ... ALL THREE. Now will any of you CALL ME?

Favorite Clownaphobic: Mike Sexton, my guitar playing co-writer and good buddy. He hates clowns ... so much so that I think he killed three of them at a birthday party when he was about 4 years old. I could have also said Favorite Future Crabby Old Man as that is his goal in life ... to wear black socks, sandals and scream at cars while he stands with a cane in the middle of the street.


Favorite Blonde: Sis-in-law Keli has a great sense of humor. She always is the first to laugh at herself (after I explain the joke a few times).

What about your favorite student? I seem to remember a great gal from Canterbury and who later interned at ACH? She was spectacular :)