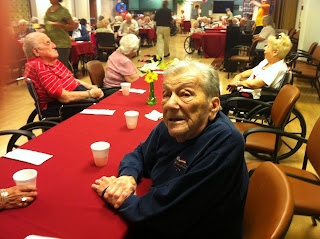 Today was the monthly birthday celebration at Menorah Manor and Sam was in rare form. Actually all the attendees were in rare form. It was a full house.

The program started with the presentation of all the birthday celebrants for this month. They started with Rose:

Sammy hadn't gotten there yet. He was still upstairs. The social director told us that sometimes he likes to make a grand entrance and he's usually fashionably late.

He finally made it during the name that tune/spin the wheel game. Each name is posted on the wheel and randomly called when the wheel spins. They are then called upon to give the piano player a song to play. The first name was Mary.

The piano player burst into song as some of the ladies sway and dance by their chairs.

Sam was watching but had a hard time hearing (of course).

I started to answer when the lady next to me said, "He really needs a hearing aid."

Again I tried to answer but she changed the subject. "You are moving in a room closer to me Sam."

Just then the Social Director came up to Sam and asked him what song he wanted to hear. "I don't know any Jewish songs."

"It doesn't have to be a Jewish song."

As the piano player starts a perfect rendition of Stardust ... Sam says , "That's not Stardust."

"That's not Stardust ... I used to sing Stardust every day."

The Social Director looked at me, smiled and said: "How can you not just love this guy?"

Another lady heard him and agreed ... "He is just so sweet. You know he is the only person that has ever told my daughter that she is getting too fat."

Yeah ... you really gotta love him. 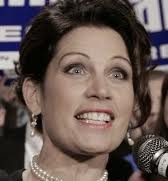 What a brilliant story!