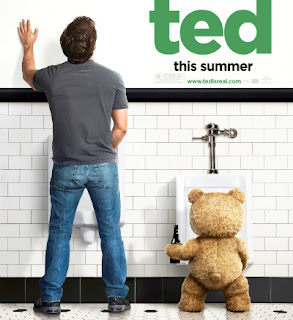 I just saw one of the best movies I have ever seen in my life. Seriously ... "TED"

Okay, I know I just did a mini review on That's My Boy ...  and it's probably overkill to do two in a row. BUT I HAVE TO.  (Well ... this one I reprinted from one I found online but it's just what I wanted to say and I'm too lazy to write it).

Ted starts in a flashback which tells the story of a lonely boy named John who wishes that his beloved teddy bear was alive. When John's wish comes true, the film smartly shows what the reaction in the real world would really be, namely, that Ted would first freak the crap out of people, then would become a celebrity.

Flash forward about twenty years and John (played by Mark Wahlberg) and Ted (voiced by MacFarlane) are still best friends living in Boston. The problem is that in a lot of ways, neither of them have grown up -- John is struggling to keep his crappy job at a rental car company since he'd rather hang out smoking weed and watching bad TV with Ted, and with Ted now a has-been with no responsibilities and nothing expected of him, he's happy to have John's company. But Lori, John's successful girlfriend of four years (played by Mila Kunis), feels that John's friendship with Ted is holding him back and is starting to get in the way of their relationship, so she recommends that John put some distance between himself and his childhood pal.

Basically, that's the story, though there's a subplot with Lori's slimey boss (played with douchey perfection by Joel McHale) who wants to get with Lori, and another with a creepy father and son (played by Giovanni Ribisi and Aedin Mincks) who want to buy or kidnap Ted. But the simple plot provides plenty of time for just hanging out and talking, and that's where Ted is at its best, since most of the film's jokes, and almost all of its best ones, aren't from big gags and set pieces, but from quick comments, observations, and moments that come up in the course of conversations. This should be familiar to fans of MacFarlane's cartoons, where a joke hits every few seconds, but it's quite an accomplishment that MacFarlane and screenwriters Alex Sulkin and Wellesley Wild are able to keep this up for an entire film without it sounding contrived.

Despite what you'd think, this talking teddy bear isn't a gimmick, but a character as real and thinking as his human co-stars, where Ted being a former celebrity is more important than him being a talking doll. The story is really about John being caught between his childhood and adulthood, his future with Lori or his past with Ted, where Ted could be a human and the story would hardly change. It was really a genius move for MacFarlane's first film to have an animated main character, something he's definitely comfortable with, and despite the movie's opening scenes, the fact that Ted is a toy is treated as normally as the talking animals in MacFarlane's cartoons, which is helped by the fact that Ted looks so real that you rarely think of him as a CG creation.

My biggest complaint with Ted is the kidnapping subplot, which is totally unneeded and adds a comparatively joke-free 15 minutes to the end of the film. But aside from that, Ted is a terrific achievement with a wonderfully original comedic voice that, unlike the recent Adam Sandler movies Ted mocks, actually respects its audience. A lot of jokes in Ted are racist, sexist, and un-PC, but it's because the filmmakers believe viewers are smart enough to know that they're just jokes. I think we'll be seeing a lot more MacFarlane movies in the future, and that's great news for comedy.
at June 29, 2012