Is It Father's Day Again? 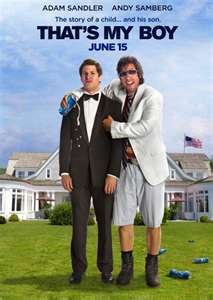 Remember Father's Day? (I'm a little behind in my blog so please allow me to digress )

I celebrated with my son, Josh, the way that any Dad would love to celebrate: A baseball game (The Rays beat Miami) and a movie that every dad and son should see together: "That's My Boy".

The movie had everything: obscenity, poor personal habits, a deadbeat dad and a successful son.

In 1984, 12-year-old Donny Berger (Justin Weaver) has sex with his 22-year-old teacher, Mary McGarricle (Eva Amurri). She becomes pregnant, leading to her crime being discovered. McGarricle is arrested, and Donny gains custody of their son, whom he names Han Solo Berger. Donny becomes a celebrity because of what happened, but is forgotten as he becomes an adult, and loses contact with his son.

In 2012, Donny (Adam Sandler) is now a slacker who has long-since squandered all of his money, drinks beer constantly, and spends his time at a local strip club with his friends, bartender Brie (Ciara) and stripper Champale (Luenell). Donny's son (Andy Samberg) no longer speaks to, nor associates with him, angry about Donny's incompetence as a father; he has changed name to Todd Peterson, tells acquaintances that his parents died in an explosion when he was nine years old, has gone on to become a successful businessman, and is about to marry rich young woman Jamie (Leighton Meester).

I won't tell you any more because it would spoil the ending (and the middle) and, what's more, the movie trailer spoils the entire story before you get there.

Needless to say, we had a great time on Father's Day and we HIGHLY recommend this hilarious, silly, non-award winning comedy.

Note: If you are married to a Catholic who regularly attends church and never uses the "f" word (not talking fire truck here), go solo or with the boys.

Debbie made me put that in.