How Cool Was That?

When you're young and impressionable, there are people in your life who affect you in ways you never forget. Here are three who affected mine: 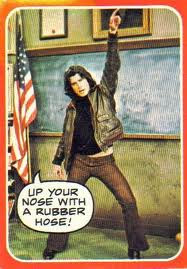 1. Mark Covert was one of my early high school heroes. He was The Fonz ... He was Vinnie Barbarino ... He was Jewish.  Actually, so was The Fonz but no one would have believed it. Jewish guys were just not cool. So anytime an MOT (member of the tribe) found a cool MOT ... he became a God. He smoked, he drank, he had "bad" girlfriends and best of all just like Fonz and Vinnie ... he was protective of dorks like me.

There was only one person Mark was afraid of: My mother. She was only 4' 11" but when she called him a schmuck and hit him in the back of the head when he forgot to take his shoes off in our house, he was a different person.

2. Ann McNair broke my heart. She was the first ... the other 328 had less of an impact after that. I found out that she was dating a friend of mine when he called me one night and I heard Ann giggling in the background. I was devastated. I couldn't believe that she would do that to me. The next day I told her that it was all over ... she lied ... I was crushed.

3. Jeff Adair taught me business skills. He was one of my college roommates. Jeff and his family owned a clothing manufacturing business. He taught me how to sell turtle neck tee shirts on campus and paid commissions on every tee shirt I sold. I think we sold them for $5 and he paid $1 on every sale. Jeff never mentioned that these shirts were either missing sleeves, sewed backward or had mixed colors.

I'd put that image on a fucking tee shirt!!!

@Gillian ... It was the hose that gotcha huh?