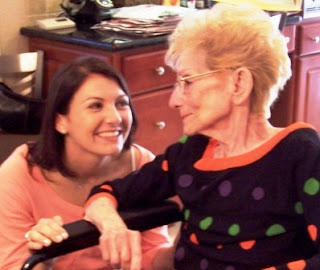 Indulge me.
Mother's Day brings up thoughts of Esther and I thought I might republish two of my favorite Esther stories:
1. THE CLOSET. (Note: Those of you who have heard this ... about 357 of you ... feel free to skip to number two) Esther's closet was literally half the size of Esther's house on Melody Drive and was legendary in New Orleans.What made this even more interesting was that Esther was not wealthy (not even close) ... just a little crazy. The house was small ... but the closet .... was MASSIVE.
One year, I made a sizable income selling tickets to view THE CLOSET. It was every little girl's ... and big girl's dream. For starters, there were eight 30 foot racks of clothing all individually wrapped and hung by color, season and type. Many were duplicates and triplicates of the same item. (Remember Esther was "obsessive" and didn't want to ever run the risk of something going out of style). I think we once also counted more than 300 pairs of panty hose ... some never out of the package. There were two full sized closets top to bottom and four deep of boxes of shoes. That's right ... shoes. Imelda Marcos was a lighweight. And her acres of makeup were enshrined in a six drawer bureau with a Hollywood mirror surrounded by lights. Macy's wanted to use THE CLOSET as an outlet store. Sam ... On the other hand ... had one rack and a clothes hanger.
2. THE BUS RIDE. In later years ... Esther's fear of flying was bad enough that she and Sam once decided to take a Greyhound bus to visit my brother and me. If that's not a funny enough visual ... here's the conversation that Esther and I had on the phone when the bus hit Clearwater ...
"Joel ... I couldn't take it anymore."
"Mom? Where are you?"
"I'm in Clearwater ... they dropped me off."
" In Clearwater?"
"Yes ... I will take a taxi to the bus station and you can pick me up when your father arrives on the bus in St. Petersburg."
"Dad's still on the bus?"
"Yes. "
" What????"
" The people on the bus are horrible ... and I told them so. They don't bathe you know ..."
" Oh no ... you didn't ..."
" I've got to go .... my cab's here ..."
She hung up.
I picked her up about an hour later as the bus pulled into the station right behind her cab. As she walked to my car the whole busload of people pointed to her ... and booed. I have no idea what she could have done to make an entire busload of people boo her.
Just then Sam got off the bus and looked at mom. He said, "Esther ... Where have you been?"
at May 07, 2011