Guinea Pig for a Day

Tonight we celebrated a $5.6 million gift from a wonderful organization to fund our Diabetes Education Initiative at USF: Bringing Science Home.

And in addition to the traditional dinner, speeches, meet and greet , dog and pony show, etc ... I was asked (along with a few others) to get hooked up to an insulin pump for 24 hours to tell folks tonight "what it feels like to do this" ... as a non-diabetic ... and about the new found respect I have for diabetics going through this process every day. Now ... just so that I don't mislead you ... the pump contains saline solution, not insulin.

I had a choice of blue, silver or pink. Despite the crowd's persistance that I wear pink, I chose blue. Our coach and instructor was none other than Nicole Johnson, the head of our Diabetes education program. Nicole also has diabetes and, among other things, was famous for being Miss America in 1999 and a national spokesperson for Living With Diabetes. Stevie B. (my loyal coworker and the one who signed me up for this "volunteer effort") went first. He "bravely" chose silver and stepped right up and was instructed on how to squeeze the circular plastic spring loaded needle which would be inserted into the side of his stomache.

Needless to say, I wasn't thrilled with the idea of this sewing needle hurling into my stomache. I was even less thrilled when Steve went first and screamed like a baby when it "unloaded". Turned out ... it was a set up. He thought he'd scare me with his little baby scream and that I would then be afraid to step up ... HA!

Nicole just smiled and shook her head and handed me the "launcher". I lifted my shirt ... closed my eyes ... squeezed and .... wow ... no pain at all. I glared at Steve and promised him he would be fired right after the dinner.

So 24 hours later I couldn't wait to get rid of that thing. I've dropped the pager looking device in the toilet, caught it on a doorknob accidently, got tangled up in bed when I tossed and turned ... and in general ... found out how challenging this one small piece of equipment was to wear.

Nicole was right ... I have a HUGE appreciation for diabetics who wear these devices. And more than that ... I have a slight understanding of what day to day living is for them ... realizing what other hurdles they must have to overcome. 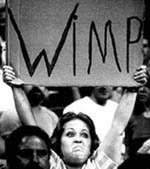 Finally ... I have come to the realization that my wife is right ... I am pretty much a wimp.

It would be just my luck to become the first man in history to develop a saline addiction.
at April 01, 2010

Good job on volunteering to be a guinea pig AND you learned something to. Just be careful you don't sign up for every offer like this...could get dangerous!

Kudos to you for agreeing to participate in this. The most I could offer would be a sympathetic head tilt and concerned face.

How in the world did you ever sleep with that attached to you? You really took one for the team here!

@Stevie .... I tossed and turned for at least a minute! Oh brave one.