A Couple Together ... Always 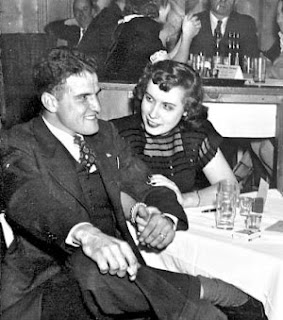 Kudos to the St. Petersburg Times for the story on the front page of the B Section in today's paper.
It's not about rape, violence, suicide or any of the other "uplifting" stories that are usually front page news.

Instead it is a very touching story about two ordinary people who had an extraordinary relationship.

Jimmy and Bettie Wise met in Baltimore in 1945. On that day ... he and one of his Navy buddies happened upon Bettie and a friend of hers in a restaurant. Jimmy's friend picked the blonde.

They got married one year later and lived in Savannah, Georgia ... where Jimmy drove locomotives for the Seaboard Coast Line Railroad carrying passengers from Florida to Maine ... on the Silver Meteor. His father did the same thing. They moved back to Baltimore the next year. Bettie taught elementary school and Jimmy drove the freight trains which supplied Bethlehem Steel.

Theirs was a love affair of polar opposites. He was outgoing ... she was quiet. But they were inseparable. They shopped for groceries together, cooked together and even did dishes together.

After dinner, Jimmy retreated to the basement where he added to his multilevel electric train set. Bettie sat in the living room with a crossword puzzle or her latest library book. He taught her how to drive their first car ... a Dodge with fins and push button controls. On weekends, they grilled hot dogs and jumped on pogo sticks and made milk shakes.

Sometimes they got in squirt gun fights ... giggling and chasing each other around the house. Every so often ... they moved the furniture aside and danced the jitterbug, Charleston or just clung to each other and swayed to the slow songs from the hi-fi.

Thirty years ago they moved to Clearwater Beach, Florida and rented a condo. Each morning, they took bag lunches with their retired friends, ate under beach umbrellas that Jimmy had set up and stayed until 4 PM swimming and turning brown under the sun.

Jimmy walked three or four miles every day, his metal detector sweeping over the sand, looking for loose change to give his grandson. He walked back to the condo, woke his wife and started breakfast.

That was their life before health problems ended their beach days.

When they were in their 80's, Jimmy legs could no longer support him and he had difficulty taking care of Bettie who suffered with heart problems and diabetes. They moved to an assisted living facility and Jimmy traded his morning walks to morning drives on his motorized scooter ... 10 miles a day.

They shared a room in the nursing area and in the last month asked the nurses to turn the bedrails down and push the beds together. For three days they held hands.

On April 4th, Jimmy told his daughter how grateful he was to have lived a full life ... free of tragedy ... with a steady job. He also told her was ready to die. Two days later, at 2PM on April 6th he died at 88 years old.

Nurses put fresh flowers on the empty bed next to Bettie. Although she was unresponsive, her eyebrows and hands moved when she was told of Jimmy's passing.

Their daughter said, "Everyone said this is so in keeping with the way they lived. He went first to get everything ready."

Such a sweet story! Now that's what I want on my paper's front page!

That was such a sweet story it actually brought tears to my eyes!