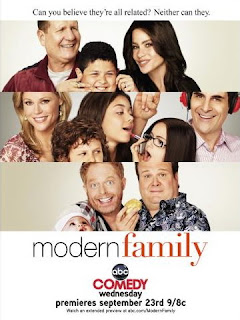 If you haven't yet seen Modern Family, the sitcom on ABC on Wednesday nights, you are missing the best show on TV in YEARS..

Here's the premise: Jay recently married Gloria. Now Jay is trying hard to keep up with his much younger and hotter Colombian wife, along with her passionate pre-teen son, Manny. Claire (Jay's daughter) is having a hard time raising her own family. Her husband Phil is great, except that he thinks he's "down" with their three kids, much to all their embarrassment. And, Mitchell (Jay's son) and his enthusiastic partner Cameron have just made a major life change by adopting a Vietnamese baby named Lily.


Jay is "Al Bundy" from Married With Children (one of my other favorites from year's past) ... remember him? Manny wears silk shirts that you would typically see only on the backs of 80 year old men and uses phrases like ...." You look stunning in that dress."

Cameron is the fill-in drummer for Haley's boyfriend's band.
Phil's dad has an impromtu visit and a brings the family a dog.
Luke runs through the screen door unaware that it was even there.
Manny plays hookie from school with Jay, to watch a horror movie that frightens him so badly he does "sentry duty" at home with his fencing sword.

They never seem to run out of ideas on this show ... and the dialogue is spot on.

Debbie insists that I really only watch the show because of Gloria, Jay's young wife. I gotta tell you .... 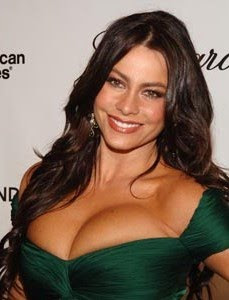 Funny, my husband watches Rachel Ray yet has never once made her recipes... I'm sure he watches her cooking shows for her.

those are some huge titties! thats why the boi's watch her.

@Ally ... So Rachel turns up the heat with hubby huh?

This is the BEST show on TV. Such clever writing, I just love it.

And I have a huge girl crush on Gloria!