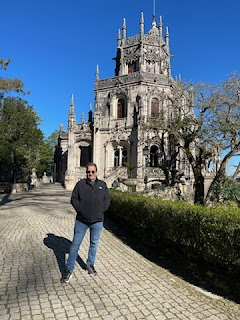 This is our last day in Lisbon and I'm on historical overload. Trying to retain information about kings, castles, religious visions, pork dishes to die for and salted cod.

We start the morning at Sintra (Not Frank Sinatra ... the other one with one "a"). The "old city" has been preserved for over 500 years, which is apparently just a few years older than my back and joints as we maneuver the stones and inclines.

At the top of one of the hills was Quinta da Regaleira one of seven noblemen's estates. From what our guide told us, this area prospered because rich people love to hang out with other rich people and when royalty lives nearby ... they love it even more. 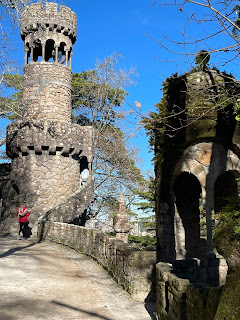 The Quinta estate was built with ornate designs complete with waterfalls and irrigation wells and underground passageways,   connected by a labyrinth of trees and bushes and ornate gardens.
Some folks still live in certain buildings that surround the property. The residents must agree to keep the area exactly as it was in the 1500s. So I guess if you're a fan of drafty old castles ... this is paradise.
Funny thing is ... only the wealthy can afford to live here. I guess Bohemians still exist! 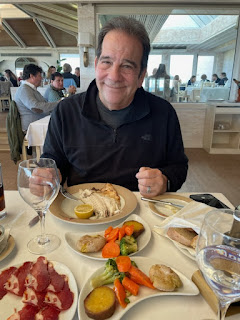 From there we jumped back in the car and drove to the coast (or as our guide said "the Malibu Beach of Portugal". A little seaside restaurant served up  an incredible lunch ... Portuguese style Bream with vegetables.
We dined overlooking the Atlantic.
A little slice of heaven Today is Day Three and it started with Debbie's favorite ... one she has been looking forward to for a long time ... a visit to the Shrine of Fatima and the Chapel of Apparitions (which I assumed were ghosts until I realized it was where that three young shepherd children had visions of Mary above a tree, I think) 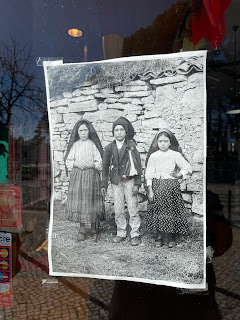 I know this because a picture of Francisco, Jacinta and Lucia is in the window of every shop that sold mementos of Mary, Jesus, candles in various shapes and sizes (saw two candles that were taller than the people holding them).
The shops carried lots of goodies for the many visitors eager to buy mementos of their pilgrimage. 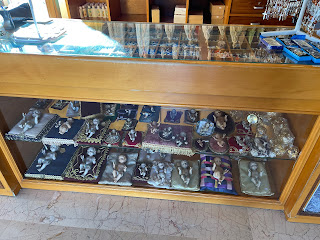 In one of these shops, there were numerous shapes and sizes of the baby Jesus appearing to say, "Won't you please take me home and put me on your kitchen counter?" 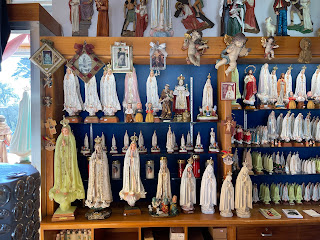 Next to them were many Marys who were in solemn prayer and looking down at cigarette lighters with their images beautifully painted on.
As the story goes, Mary appeared six times to the the children as an apparition ... the last time it was well documented by 60,000 witnesses.
I assume they must have all lit their lighters at the same time (which is why they are sold in the shops ... wouldn't you think?) 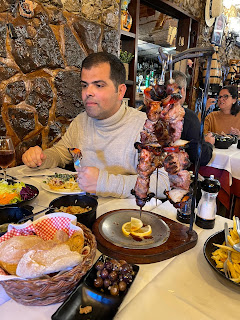 We ate lunch at Crispin's, which was originally a personal home of one of the faithful in Fatima, and seated with us is Tiago (our great tour guide).
**************************************
NOTE: Let me tell you that our hotel, Bairro Alto, was the greatest thing since sliced bread (or Portuguese croissants). The room, the service, the amenities, the food ... all five star just like the rating given this boutique hotel. Highly recommend it if you visit Lisbon.
Tomorrow we fly to Sevilla ... TTFN
at January 23, 2023