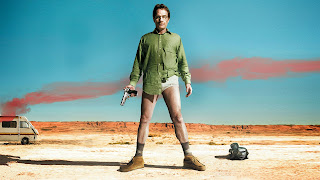 Translation for others my age: Breaking Bad is an excellent series that outshines everything aired on TV lately.

I know you've heard it from me before. I fall in love with a series and I babble about it being the best or the greatest thing ever ... but truly ... the writing and the incredible detail to structure is amazing.

Admittedly, I am a huge Bryan Cranston fan. I had the good fortune of meeting and spending time with him about 15 years ago. He was in St. Pete to play in our Major League Alumni baseball game for All Children's Hospital. I've written about this event in the past ... it was a great weekend hosted by Major League Alumni Association and ACH featuring ex big leaguers and celebs in a big baseball game and weekend event. Brian wanted to visit the kids at ACH so I picked him up at his hotel and took him through the hospital and answered questions he had about the event itself.

He is a very smart guy. 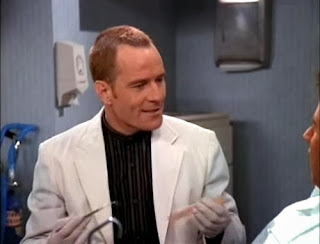 You just have to spend a few minutes with him and it's obvious that he does his homework ... he is a student of his environment. At the time he was doing a hundred and fifty different projects including writing a screenplay with his wife. He was starring in Malcolm in the Middle and was in so many other great roles.

I told him how much I loved him as the cool Dr. Tim Whatley the dentist on Seinfeld (remember ... he converted to Judaism for the jokes). He called me "the opposite of an anti-dentite".

In Breaking Bad he plays a chemistry teacher, dealing with terminal lung cancer who becomes a meth cooker to help pay the bills and leave his family with funds to live after he's gone. There have been 5 seasons that you can watch on Netflix ... WELL WORTH IT. I'm furiously trying to watch them all before the series end this year.

I LOVE this show! I watched the first 5 season on Netflix in about two weeks. I have three episodes to watch before the finale tonight.