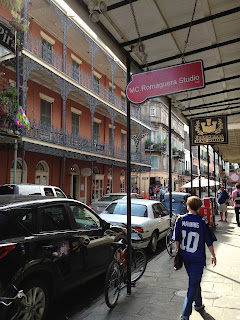 What a great time we had in New Orleans this weekend. We did some of the tourist stuff of course: Strolling down Royal, munching on po-boys at ACME, sucking down cafe au lait and beignets (although we did that at Morning Call in Metairie), gambling at Harrah's (and at Treasure Chest at the Lake) ...

The highlight of the weekend was a trip to Frenchmen Street Friday night. I could not believe how much that's changed ... It's where the locals live and party. It's what the Quarter USED to be like ... located just outside of the Quarter in the 7th Ward on the other side of Esplanade, Frenchmen Street has it all. 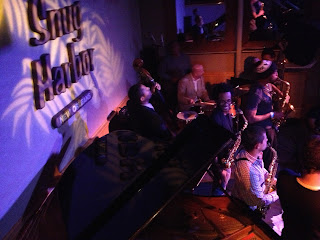 Snug Harbor is still there and rocking the night away with GREAT jazz acts. Any night you might see Charmaine Neville or Ellis Marsailis or Maria Muldaur. We saw Wess Anderson on sax and his son Wess Jr on trombone. They just killed it.

We went with our friends, the Longs who happened to notice me leaning over the balcony with my face in my hands as I watched the piano player beat on the keys. They also noticed I took a little nap at the same time ... dangerously close to falling into the piano. 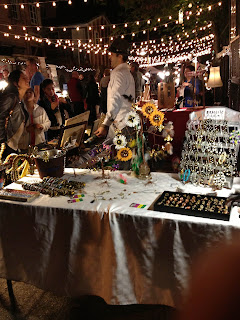 Trust me ... it wasn't the music that put me to sleep .. it was the food, the drinks and the late night gambling (according to Debbie).

Outside there were street vendors bathed in a sea of lights and selling everything BUT mardi gras beads and hurricanes WHAT A RELIEF. It's only about three blocks or so ... but it is something that you wouldn't want to miss. John Long was so excited he did his happy dance (don't ask ... it's something you WANT to miss). 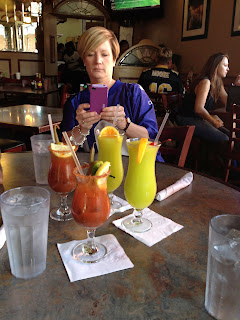 Drinks were the order of the day and night and morning and afternoon ... well any time.

Had to take this picture of Carol taking a picture of the drinks. Apparently, she wanted to document everything in case she couldn't remember later. That's a problem in New Orleans ... they are called blackouts. 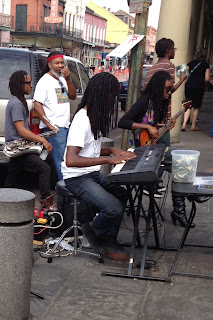 This group played outside of Cafe du Monde. Not sure about the name of the group but they were pretty good. Big surprise huh? That's like saying I ate some a great restaurant in New Orleans. 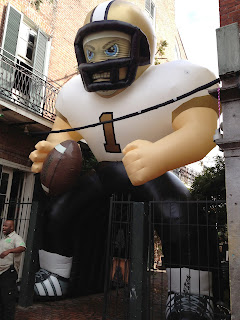 There was a Saints game ... a big one. Saints vs Falcons. Saints won.

This was either an inflated Saints player at the entrance of a Bourbon Street bar ... or just a guy who lost all his money at the tables, gave a pole dancer his car keys and found out the next morning that he got stuck on a telephone pole.