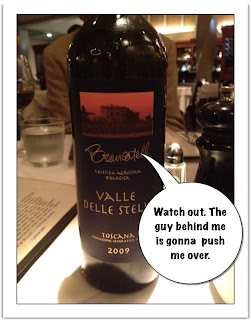 Just got back from Atlanta.

We had a great event for USF ... Judy Genshaft (USF President) and I hosted more than 120 alumni at the High Museum. Lots of positive vibes from the crowd and great follow up meetings the next day.


Dinner had a little wine mishap. but I am getting ahead of myself ...


The flight to Atlanta was fairly uneventful (after I found out that I left my phone in the car and ran back before take off). It actually took less than an hour. The train ride to the rental car building took about 20 minutes and the Avis agent took about three days to get our reserved car.


Okay ... slight exaggeration ... 2 days. Actually she was the manager and was trying to be helpful ... but she couldn't figure out the computer program. Three different agents had to help out. Finally she got the Garmin GPS for us and SHE preprogrammed herself. I should have seen this coming. It never worked the entire trip. All it did was track simulation routes to Brazil.

Judy was my navigator and although we had maps and directions and even an iphone programmed on map quest ... we both have the same sense of direction ... "South? South? Give me something that makes sense like the corner of Dunkin Donuts and the Tae Kwon do Academy." 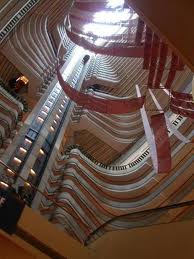 Somehow we made it to the hotel. The Marriott Marquis is one of the tallest buildings in downtown Atlanta and we could see it clearly ahead. It somehow took us 4 tries to find the right turns to get to it.

When we checked in, the clerk told us that we had been upgraded. Hmmm ... I'm thinking ... it's good to be with the President. He handed us the keys to two rooms on the 45th Floor.

I stepped into a suite large enough to house my whole family. On the dining room table was a large basket filled with goodies and inscribed "Hope you enjoy Atlanta". This is incredible ... a whole floor of large suites and a big welcome basket ... Wow.

Judy and I met in the lobby after unpacking and made our way to the High Museum (which was only 10 minutes away ... but took us 20).  We mingled and socialized ... had a brief program about the University and took our host and another couple out to dinner afterward.

The food was great and Judy liked the wine we ordered so much that I took a picture of the bottle for her. One of our guests had the same idea and reached over to grab it for his camera. The bottle didn't cooperate and I wound up with a lap full of red wine. As klutzy as I usually am, this trip was all about people spilling things on us. Judy had a coke spilled on her purse the next day and a bag of chips fell on her at the airport.  Thank God it wasn't my fault.

Later ... the president of the alumni association asked how the hotel rooms were.

"Good ... because I called ahead for an upgrade and sent Judy a basket. Did she get it?"

When we got back to the hotel I told Judy that there was a basket in my room for her ... it was accidentally given to me. I showed it to her.