Where In the World Are Debbie and Joel? 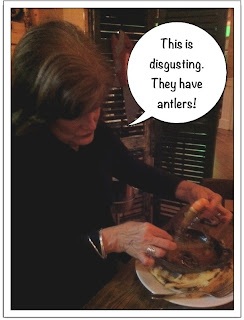 That's right ... we headed to the Crescent City right after Thanksgiving dinner with the Gallaghers. And my hometown was loaded with activity ... there were three home games: Saints vs Giants, LSU and Arkansas (well ... Baton Rouge via New Orleans) and the Bayou Classic (Grambling vs Southern).

Despite the massive crowds, we made our way through the city... AND through equally massive plates of food and piles of plastic casino chips.

Speaking of food ... Debbie tried her hand at barbeque shrimp. Not a fan of crawly things with antenna and legs, Debbie bravely peeled the greasy shrimp that were about the size of small Volkswagons. The weather outside was frightful.
But the "music" was delightful.

The music from the street bands that gather on every other street corner is not the typical off key/hold your ears stuff you hear in other cities.

Much of it is actually very good.

We spent time on Royal Street looking through galleries for something cool for our walls. Those of you unfamiliar with the art galleries in New Orleans might not know that there are lots of them.

After 23 galleries, I told Debbie that I was exhausted ... no more art for me. I needed an infusion of slot machine noises. 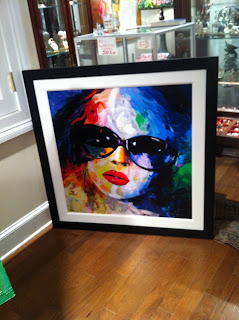 I did stick around to make a few purchases.

Like this painting from an Italian guy, Antonio Tamburro ... I like this one, but who knows ... this guy might be a teenager who lives at home and paints in his garage instead of what the art dealer said: Educated at the School of Art in Naples.

This painting was called "Shades". 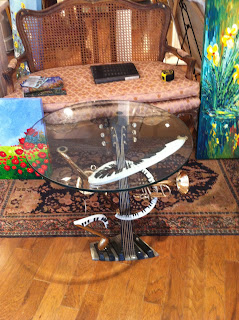 And we bought this table done by sculptor Paul Wegner.

This is a rare table made the same way ... the story is (get this) Wegner shot himself accidentally in the arm and now no one knows if he'll ever sculpt again ... sooo ... this table will be worth a fortune one day. (right)

Actually it isn't important to me because we love this table regardless. Cool huh? 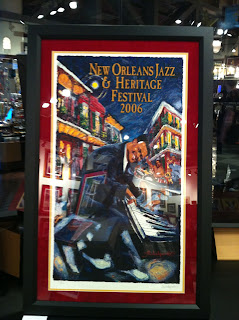 Check out this Fats Domino Jazz and Heritage Festival poster from 2006.

It was painted by James Michalopolous. He's a New Orleans boy and has done many of the Jazz posters. I love this guy. His style just makes you smile. I can hear Fats banging on the keys when I look at it.

We've got about 12 of these posters with Jerry Lee Lewis, The Nevilles, Jimmy Buffett, Allen Toussaint and more.

Of course the story on this one is that there are no more for sale and it too is worth a Biiiillllllion dollars (well maybe a couple of hundred). 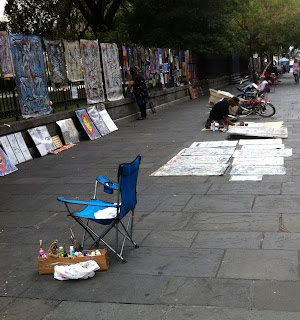 So ... just as I was heading out of the galleries I met these three guys named Tamburro, Michalopolous and Wegner.

Their stuff was hanging on the fence and selling for $5.67 apiece.

Ah, wonderful account of art in the Big Easy. Scott and I have left a few dollars in those galleries...