How Can That Little Disc Make That Much Noise? 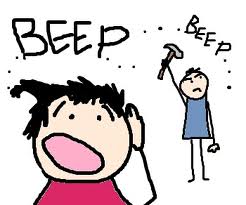 Think of a sound that drives you crazy.

Answer: A smoke detector with a faulty battery.

Coincidentally, that's what we had ... on Halloween night. Actually, we had at least two. It sounded like Angry Birds were unleashed in the bedroom ceiling.

It happened at about 11PM.

Debbie and I were just heading to bed. Trick or Treaters had finally stopped ringing the doorbell (The little guys go home at 7 ... the teenagers at 9 ... the druggies still hang out till 11). We dragged ourselves to the bedroom when ...

"I'll get the batteries," Debbie calmly replied as I dragged the ladder out of the garage and slammed my knee in the process. I muttered more obscenities.

"You know, Joel ... you always curse when you have to fix something in the house."

"Excuse me? I do not." Hobbling, I put the ladder under the first beeping smoke detector, climbed the steps and tried to unscrew the ridiculous plastic disc that wants to pull away from the ceiling instead of coming apart.

"Yes ... you do. You never just fix things without cursing."

"Sorry, I should have said  ... 'Oh honey, I think I'll just fly up this ladder and replace this little battery to quiet our precious smoke detector'... right?" Just as I finally got the disc opened, the battery flew out and hit Debbie right on top of the head.

"Sorry honey (suppressing laughter). It just flew out ... can you ... um ... hand me another battery?" Maybe I was living dangerously at that point. Fortunately, Debbie has terrible aim and I was comforted by the fact that she was as annoyed by that sound as I was. She handed me the battery.

I slipped the new one in and closed it up. I moved to the next beeping one and did the same thing.

We looked at each other silently. I took the ladder out and started all over again. "Are these new batteries?" I asked.

"Of course they are."

"I did last time until they all shut up."

"You only did one last time."

I didn't answer. I just repeated the process.

I did it again. I put newer batteries in. I talked to it, coddled it ... all but kissed it. It was quiet. We waited.

We turned out the lights.

Debbie sat up in the bed then covered her ears with the pillow as she screamed: "SHUT THE HELL UP!!!!!"

FYI - cursing makes the job easier. It is a stress reliever! (At least that is what I tell myself because I am the exact same way!!)