Just getting over jet lag ... and it's been a week since we've been back. By the way .... here are some additional thoughts about our London trip. 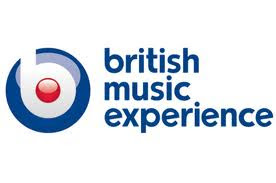 The British Music Experience was a very cool place to visit. Located in a "big bubble" at the Greenwich UTube stop, this was not a typical museum.

The venue ... by the way ... was also a big concert arena (Katy Perry was appearing that night so there were hundreds of girls hanging around dressed like cotton candy and kewpie dolls). 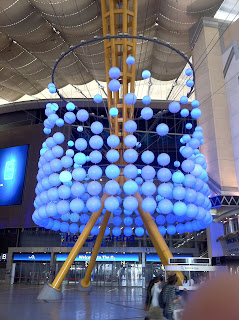 Walking through the corridors was a real experience itself.

We passed open air booths that you could make your own music videos, dance videos and newscaster videos.

A group of the most unlikely looking Supreme wanna-bes were dancing to a karaoke version of "Stop In the Name of Love". A teenager was doing her best impression of Jane Pauley. And some guy with a lot of chains was just making faces at himself on the screen. (I take that back ... I think he was robbing an ATM machine).

Big displays of bubbles and floating stuff surrounded a bunch of random restaurants. What we discovered about London was that many restaurants looked appetizing and trendy and lulled you into ordering from interesting menus.

But the food pretty much sucked. 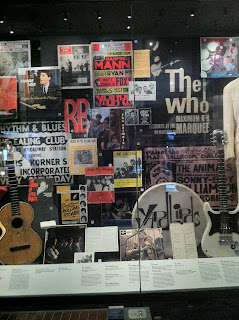 However ... The British Music Experience museum was a real treasure.

When you enter the domed entrance, you get a ticket that is really a data card that you can use to download everything you want to keep.

Each room is a decade of British Music. Early British Jazz and Blues, Rock and Roll, Punk, Rap ... even current stuff that I had no interest in ... but still looked at.

Each display had a narration about interesting facts ... like how many drummers the Beatles really had and who Pete Townsend stole his propeller guitar stroke from (Mike Sexton will know).

My favorite room was filled with plugged in guitars, keyboards and drum sets ready to play. You could put on your headsets, crank up the volume and no one else would even know you were playing ... until they noticed the blood on your collar. 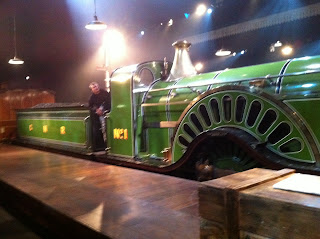 The last night we were there ... we were treated to a special production of a play called "The Railway Children".

It was actually produced in the Waterloo Railway Station and used an actual steam engine train. It was also based on a classic children's book by the same name that apparently lots of British kids knew very well. Debbie and I were clueless.

It was well done ... except the actors kept speaking their lines in that foreign language that Americans have a hard time understanding ... English.

After the play, we got a special tour backstage and went through the train.

Turns out ... this was used at the turn of the century by a wealthy Brit who had a penchant for living the high life. You couldn't just ride this train and sit in his personal car ... you had to have a special invitation.

Obviously, if this guy was still alive ... we would have only seen this train from a great distance.

The trip back home was a typical Griswald/National LampoonVacation/Momberg event. We flew from Heathrow to New York on Sunday at noon, London time. It was a full flight (in airplane talk that meant that they were oversold by about 150 seats ).

We decided to try the new special fare that is offered by Delta ... "Economy Comfort". For an additional $80, you can have a seat in the first three rows of Coach which have been redesigned to be more comfortable, roomy and you get free liquor.

Well ... big surprise ... we sat down in our "comfort" seats and found that we had exactly 4 more inches of knee room and the seats were pretty much the same. Also ... on overseas flights ... wine and beer are already free.

Basically ... it pays to upgrade only if you are an alcoholic and drink more than 20 shots on the way home. 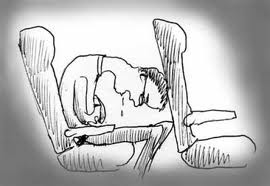 It only took us 21 hours (including a three hour delay at JFK while we wandered the many terminals under construction) before we finally got home.

I'm so envious - The British Music Experience museum. Oh my Greatness! I would've loved to have visited....