Mr. Zimmer and the AV War

I was looking through old high school yearbooks last night and noticed that I appear in almost every picture of every organization or club at Fortier. The interesting thing was that I wasn't a member of any of them. Neither were the gang of ten of my friends that were next to me in each picture. We just showed up on picture day to each one  ... The Travel Club, The Chess Club, The Poetry Club, The Spanish Club ... Of course you can spot us right away by the way that we were picking our noses or flipping off the cameraman. 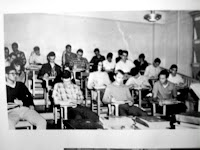 My favorite picture was shot in Physics class sitting in a stairstep desk arrangement ... with my middle finger stuck in my ear. My friend Barry Marks is next to me in the same pose. We were SOOO cool. Unfortunately, the one person missing from that picture was one of the most bizarre teachers I ever had ... Mr. Zimmer, the physics teacher.
Mr. Zimmer was definitely a regular consumer of pharmaceuticals and/or alcoholic beverages. By regular ... I mean every day. Kramer from Seinfeld couldn't hold a candle to this man. His hair was "Krameresque" ... flying above his thick eyebrows and dark glasses. I can't remember one complete sentence he ever put together.

And his classroom antics ...


On our first day of class, he had a television set turned to a non-broadcast channel (remember those?) that just had "snow" and white noise, irritatingly turned up loud. He left it on all semester. He said it was to test out how long the TV would last ... to make sure his warranty was accurate.
Another time, he brought in a bunch of different objects like basketballs, paper weights, encyclopedias ... and pitched them out of our third story window and then he'd run down to get each one. I'm not sure if he ever explained that one.
But the best day of all was the day that James O'Malley (I changed his name to protect his identity) and Robert Noonan (his too) collided in  the "Battle Over the Audio Visual  Projector". It still lives in infamy among those of us that were lucky enough to have lived through it.

It started innocently enough when Mr. Zimmer quietly asked everyone to take their seats as he stepped aside for James O'Malley, the AV boy, who lifted the 16 mm projector and it's stand to the center step. James was wearing his standard AV outfit that day: White shirt, black highwater pants, white socks and hush puppies. He topped it off with an oversized black raincoat speckled with  flakes of dandruff along his shoulders and stuck to his greased back hair.
Mr. Zimmer mumbled some nonsense about the movie we were about to see, put on his sunglasses, turned off the lights and took a seat on the first row. His head dropped immedialtely into a drunken slumber.

That went on for a few more minutes with snappy comebacks like that until Noonan made the classic move that strikes fear in the heart of every AV boy:
HE SLIPPED A PENCIL IN THE SPOKES OF THE TAKE UP REEL.
The film stopped, sizzled and ripped. O'Malley went postal. His eyes ablaze, he pulled Noonan out of his seat and wrestled him down the stairs knocking over the projector, desks and students along the way. They froze when they landed right in front of Mr. Zimmer only to find out ...
... he slept through the whole thing.
at September 08, 2009