After two years at LSU I was ready for a change.

I realized that Architecture was not for me and switched to Landscape Architecture with my roommate Barry. But when I found out it had nothing to do with gardening and that I had to memorize 3000 names of different plant materials, I quickly lost interest.

I found out that I was pretty good at design. I could create great models out of balsa wood and particle board. Problem was ... nobody uses balsa wood or particle board to build real houses. Who would have known that?

So I gravitated to the Arts, and left LSU.

One of my childhood friends, Adam Skorecki, told me about the University of Georgia and the Arts program there. And just like that, I transferred. Because I had total faith in Adam's knowlege base (I knew him when I was 8), I was certain this was my destiny. I only lost about two years worth of credits, but who's counting?

Adam and I knew no one in Athens and wound up joining a fraternity to meet people. We of course had to go through pledge class and hazing but I was used to that at LSU. I was just glad they didn't shave my head and give me a rifle.

Culture shock set in when I had to relearn English. "Where y'at?" loosely translated into a 16 syllable phrase: "Well, howwww you doowin', bowey?" Four letter curse words were expanded to eight letters and "Bye" became ... "Y'all come back to see me heeyah?"

Now before you think I'm a south-basher, remember I grew up in the south. New Orleans was about as south as it gets geographically ... if you surgically removed Florida. Even so, I was as foreign to these guys as they were to me. They thought I was from New York. But I managed to communicate eventually. I found that words like beer and sex were typically used about 90 percent of the time and even though it took longer to say them, nothing was lost in the translation. 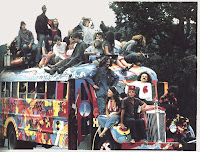 I think I did well getting accustomed to the new language and the new culture.