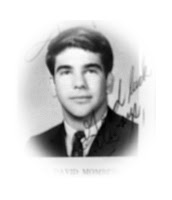 After 16 years of relative anonymity, my hair grew out from the buzz cut I had for years and I somehow stumbled into "the sacred cool group" when I was a senior. I'm not sure how or when this happened but I suddenly had friends with names like Joe Pecot and Bill Hyde and Mark Covert. My former fellow nerd group of Elliot Shushan, Philip Sizeler and David Radasky had moved down the list.

Nevertheless ... it was a turning point in my life. I won senior superlatives, student council elections and drank heavily at the Raven on school nights. The latter really brought me closer to my new friends.

The Raven was the neighborhood bar. Percy the bartender never checked an ID and even let us come behind the bar to mix drinks. 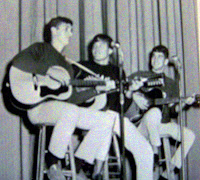 I forgot to mention that I had music friends as well. Matt Campbell, Mike Elam and I had a group that played for school events. We called ourselves "The Brothers Two Plus The Jew". Guess who I was? We would do Smothers Brothers routines and change them slightly to fit with our name ... like "They Called The Wind Machaia (instead of Mariah)" and "My Zelda" instead of "Mathilda" (old Allen Sherman routines). It's okay if that didn't make you laugh. The students didn't laugh either.
Another friend, David Feder played with me in the French Quarter on the sidewalk. That was when we pretended to be a couple of starving street musicians. Made alot of new friends with that gig.

Then there was PE.


I actually got picked for football games. I remember once when I got picked for Vincent Ambrosia's team. Vincent was my age ... I think ... although he had beard stubble and dark hair all over his body. He used to dress out for PE with his tee shirt tucked into a pair of long black pants ... high up on his waist to his chest ... and pointed toe black boots. His cigarettes were rolled into his sleeve and he always had a toothpick behind his ear. Vincent wanted me to play quarterback. Everybody laughed ... including me ... but Vincent didn't. He felt charitable that day. I think I bungled through most of the snaps although most of it was a blur. Then finally we were ready to score and Vincent called the next play. Long pass down the right sideline (by the coke cases) and just before the big oak tree that bordered the field. Vincent was gonna be the receiver.
He started at me and said, "Don't mess up, Mardi Gras (that was my nickname by the way. There was a song in New Orleans called Mardi Gras Mambo ... which became Mardi Gras Momberg)."
Well ... I know I was shaking in my sneakers when I let the ball fly on the next play. It sailed over Vincent's head and into the oak tree. Trouble was ... so did Vincent. He was looking back at the ball and not at the tree.
Knocked out cold.
There wasn't a sound. Everyone looked at me and shook their heads thinking what I was thinking. I'm a dead man when Vincent comes to. Vincent turned his head slightly opening one eye and trying to focus. I ran quickly behind the tree, grabbed the ball and cradled it in his arms.
"Vincent ... you did it, man. TOUCHDOWN!"
He smiled slightly and passed out one more time.
at September 08, 2009