It's Good the be The King! 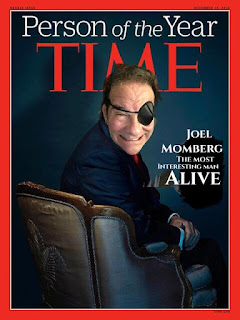 How cool is this?

I was just voted Person of the Year by Time Magazine. I know ... Trump was the original pick but he turned them down. I don’t care. So what if I was the second choice? They called me today to ask if I would accept and I said “Sure ... I’ll be happy to. “

There are a few strings attached ... however.

-First, they said I would be responsible for payment of the first press run. How many could that be ... a hundred or so?

-Second, there is some prince in South Africa that needs my help (this apparently is required as part of the humanitarian component of the nomination). I’ll help him. How complicated can it be?

-Third, this particular issue will not make the commercial news stands. Special issues seldom do (a fact I didn’t know). The people I talked to promised that copies would be sent electronically to subscribers. They said that I should get a list of family and friends together for a special mailing that I might have to pay for as well ... but it's worth it.

I have to say that all the folks that I have dealt with are so thoughtful and willing to help. I had no idea of the many nationalities that work at Time. I'm pretty good with accents but I had a hard time understanding many of them over the phone. They apparently had a hard time understanding me as well. They repeatedly asked for my social security number, credit card info and my address.

They take suggestions for future issues of Person of the Year! So ... I gave them some of the names of my closest friends and family that they can contact. Just think ... YOU MIGHT BE THE NEXT PERSON OF THE YEAR!
at November 27, 2017