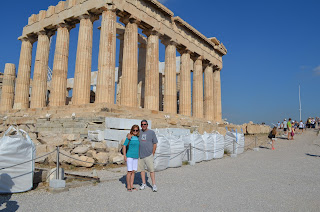 The Acropolis was only a block away from our hotel. Friday was the day that we set out on the trek to climb the famous structure … the ancient site where it all began.

I sound pretty sure of myself huh? Well trust me, when the time came for us to get up and get ready, all I wanted to do was stay in bed. Heck with the ancient ruins. My muscles still screamed at me from the day before.

But somehow I managed to drag my butt out of bed and limp downstairs to join the others in today’s adventure. Our guide was named Debbie. Easy name to remember … even though it wasn’t her real name. She told us her real name was too hard to pronounce so apparently she used a stage name.

The other Debbie was still getting ready. She’s typically the last one ready. Everyone expects it and therefore no one is really concerned that she is taking longer than everyone else. Ever notice how people who are always late are given a pass. The comments you might hear are …”Well, I guess she’s running late again. We’ll give her a few more minutes”. If you are the type that is always on time however …. Everyone is concerned and will give you endless amounts of grief for holding them up. I belong to the Debbie group unfortunately although not to the extreme that Debbie presents.
Okay … enough of the mindless backstory.

We drove our van to the base of the Acropolis and started our ascension to the top. As I walked, I could feel my calves, knees, hips and back scream out in pain. I noticed Tom was hobbling as well (his knees are shot too but he continued on) so I tried to remain stoic trailing the others. I think they only knew something was wrong when I said quietly, “What’s wrong with you people? Don’t you feel any pain? I want to die right here!” Debbie quietly replied, “Joel … now we are still in the parking lot. Can you make it to the path?” I was brave, “I will try.” 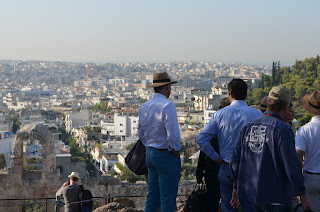 There were literally hundreds that filled the narrow cobblestone paths that led to the structures. The cruise ships flood the ruins and make it a challenge to navigate around.

But in all seriously … it was awesome!

The size of the structure (what remains) is truly magnificent and the story of how this was built stone by stone, mathematically measured for stress and scope and how it was maintained so many years ago was incredible. 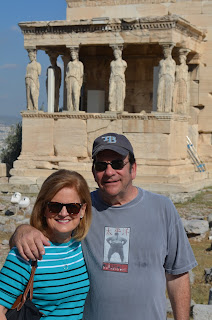 The Erechtheion was built as a religious temple. It is built on multiple levels to match the contour of the mountain. The porch has a roof supported by Caryatids (six chicks with thick necks) The originals are in the Acropolis Museum. One is missing ...  because the original was taken (stolen ... according to the Greeks) to the British Museum along with many of the other artifacts during a time that no one was really minding the store.

There are a series of underground floors and hidden rooms that no one quite understands but truly an architectural marvel. 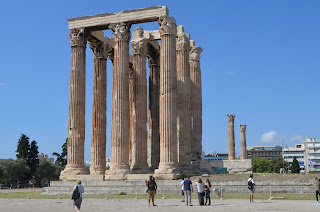 All that is left of The Temple of Zeus are only a few columns in the center of Athens. The rest was destroyed or probably in the British Museum.

There are a couple of Temples of Zeus located in other cities. Apparently, Zeus who was the king of all the gods and the father of Athena, had numerous affairs and perhaps that's why he's got a temple in every port. 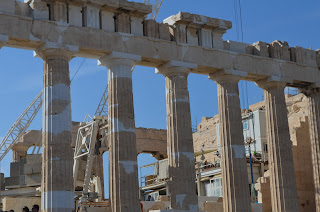 The Parthenon is the largest of the buildings and the temple that was first built to honor Athena and housed a large statue of the goddess.

The columns are built with a slight slant inward ... we were told that it was so that if they were extended, they would converge 3.2 miles in the sky. Not sure if the significance was "Pi ... 3.14" or if they just screwed up ... or if there truly were aliens that built the whole thing. 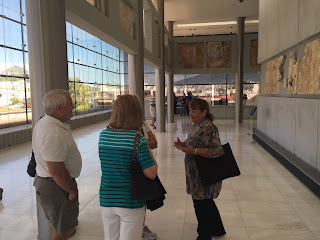 The Acropolis Museum was next door. We finally were able to see what the whole complex originally looked like before it was rubble. I wish we would have stopped here first. The guide also said that most of the buildings were constructed by Jewish slaves.

I had trouble understanding that historical fact . (Not that Jews were slaves ... but how Jews figured out how to use tools.)