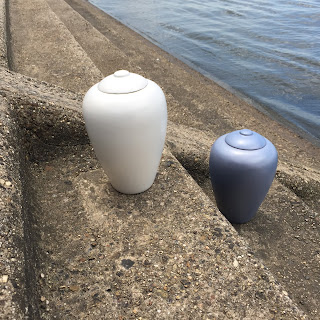 This past weekend "family" trip to New Orleans was a far different one than any before. Brought my mom and dad home for the last time. Esther died five years ago and Sammy died just a few months ago.

This would be the "Sam and Esther Final Trip Tour". We picked out their favorite places for the final visits with Sammy (in blue) and Esther (in white).

The first picture was actually taken on the final leg of the trip. They are sitting on the levee steps at the Lakefront, one of the most prestigious areas to live in New Orleans. They couldn't afford to live there when they were alive. Now they can hang out here forever. 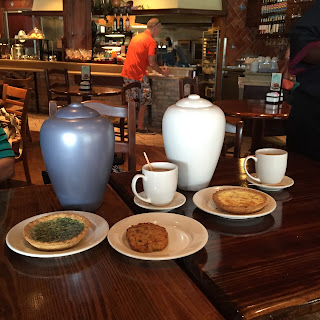 But I'm getting way ahead of myself. Let's start with the first stop. Le Madeleine's is a little restaurant that was one of their favorite places to eat breakfast and lunch. We set them at the table with coffee and quiche. One of the wait staff came over to the table and asked about the urns.

"My mom and dad loved this place," I said. "Just wanted them to visit one last time."

"What were their names?"

I told them and showed him their pictures.

"I remember them," he said. He took the pictures over to the other staff members and yelled back to us. "Hey they remember your dad. He loved to order half a chicken right?" 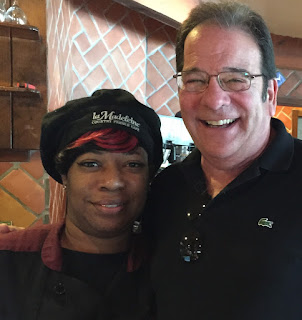 The staff sent over a bowl of tomato soup and a Caesar salad for Esther. They loved the idea that we would do this for them. It had been 10 years since they had been in New Orleans and they still remembered Sammy ordering chicken. 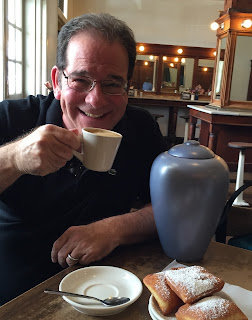 The next stop was Morning Call.

It's only a block away from Le Madeleine and is the coffee and donut place (beignets for you non-residents) that has been a staple for us y'ats who grew up here for many years.

Sammy read his paper and met his friends for coffee all the time.

The original was down the street from Cafe du Monde in The French Quarter. Actually, The tourists went to Cafe du Monde and we went to Morning Call.

It was open all night ... after a night in the French Quarter or party, that's where we would all wind up.

They reassembled the whole place in Metairie. 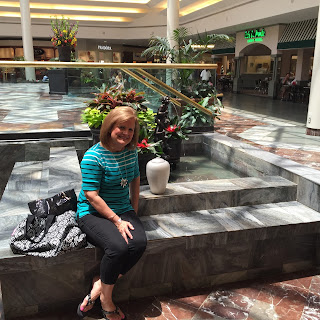 Across the street was Lakeside Shopping Center, Esther's favorite place to shop. Debbie took a few minutes with Esther in the center of the mall to get fashion tips.

Esther, you may remember, was a notorious shopper. She loved her shoes so much that she used every closet in the house to house them. But it wasn't only her shoes that had royal treatment. She had a closet built just for her clothes, her jewelry (mostly costume) and makeup ... it was like a mini department store inside.

A lot of the places that she used to frequent are gone ... but I know she was smiling down at her brief visit to Lakeside this weekend. 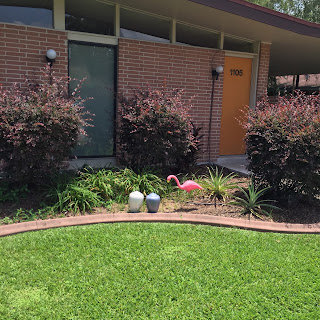 Their home was just a few blocks away on Melody Dr.

The owners weren't home but we met the neighbors (actually knocked on their door first).
They told us that the house has been kept exactly like it was. The closet is even still intact. Most of Esther's clothes stayed with the house when we sold it to this couple ten years ago. They lost everything in the storm and luckily she wore the same size as Esther.

We took their picture in the little outside garden that Esther was so proud of. She won awards for it years ago. (No one ever knew that she put plastic plants in the beds ... TRUE story). 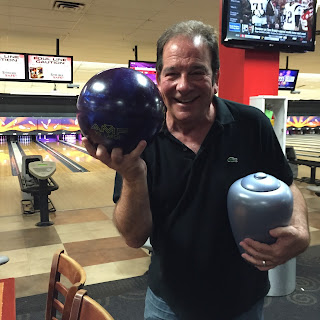 I'm not sure if he ever bowled there ... but the bowling alleys that he and his buddies used are long gone. Most of them were uptown before they moved to Metairie.

But this one was close to the Treasure Chest Casino where I KNOW they hung out a lot. 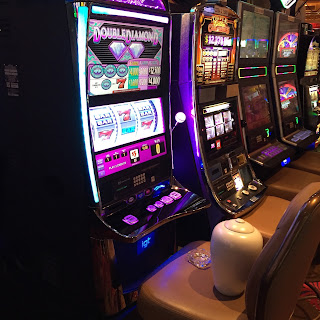 Speaking of the Casino ...

I set Esther up at a $5 machine at the Treasure Chest (the only casino in Metairie) and got her an ash tray for the cigarettes that she claimed she never smoked. 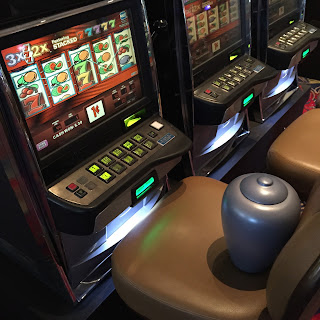 Sammy was in the other part of the casino playing the penny slots.

Not a big gambler, sometimes he'd put a few dollars in a machine but most of the time he held Esther's purse and watched her feed hundred dollar bills into the high limit machines.

Okay ... maybe there is something about genetics and the Momberg family. 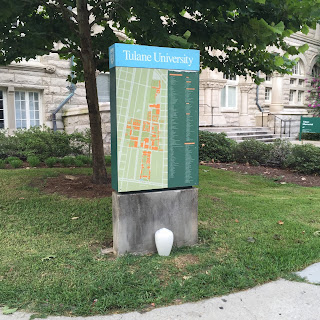 Esther graduated from Newcomb College (which was the women's college at Tulane). No longer there ... we placed her at the foot of the Tulane Campus directional sign instead.

She was still a teenager when she graduated and did so with honors. 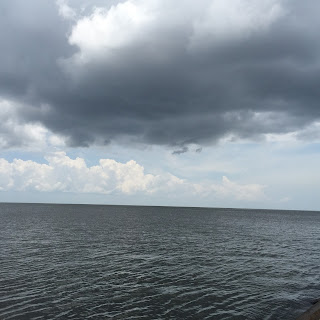 Well ... that brings us back to the Lakefront.

As mentioned, it was our last stop and the final resting place for Sam and Esther. The clouds rolled in just as they rolled out.

A few rumbles in the sky seemed so appropriate for them. Their lives like all lives had their share of rumblings, a few dark clouds but silver linings and lots of laughs along the way.

Rest in peace, Sam and Esther. Glad you're back home.

This was wonderful Joel. Thank you for sharing this with us. Condolences to you and your family. Love, Morgan

This was wonderful Joel. Thank you for sharing with us. Condolences to you and your family. Love, Morgan