Not Quite Brady Bunch Mother's Day 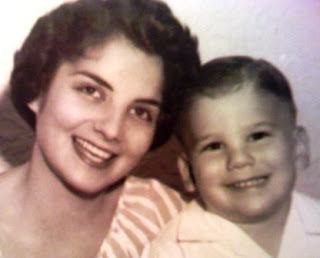 With Mothers' Day here, I've been thinking a lot about my mom.

I wanted to write something sweet and uplifting about her now that she is no longer with me ... but  she would probably just roll her eyes.

You see, sweet and uplifting are not the adjectives that someone who knew her would use. Interesting, funny, a little crazy, smart, competitive, obsessive/compulsive and prickly would be closer to it.

Esther really didn't want kids. This fact she told my brother and I repeatedly. I think the day the house was on fire and she forgot to get me out until she realized that perhaps she was hasty running out alone was a sign of that.

She was born to be rich (we weren't), destined to be famous (she was known in New Orleans as ... well lets skip that part) and spent time in the kitchen only as a visitor (she never cooked a meal ... just made sandwiches and reservations).

She was freakishly smart. She graduated from Newcomb College (Tulane's woman's college at the time) on a full scholarship. She was only 19. She was a math major. Got married to my dad, had kids and didn't work.

Esther's biggest fear was always being poor and not being able to have "things". The irony was that she spent all the money we had on shoes, clothing and jewelry. Her closet was as big as our house .

We would never be confused for The Brady Bunch or Ozzie and Harriet. But, Esther tried her best. She had no role models when she was growing up. She could have been a doctor or a lawyer or just about anything after she graduated. But instead she put her own career aside, raised two children and tried to do what she could to help build a family unit.

At times, she was often a prisoner in her own body. As children, we didn't understand this. We would be embarrassed that our friends didn't come over or that she had fits of depression and anger and hopelessness that were hard to deal with.

That's what good mothers do. You were there Mom ... for better or worse. It's taken many years for me to appreciate what a strong commitment that must have been for you.