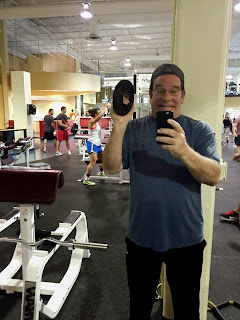 It's been a while ... so I wanted to take it slow. Don't be fooled by this 3 ounce weight that I am carefully lifting over my head. There's method to my madness.

First of all, I know that my muscles need time to re acclimate to this new strenuous regime. I can only lift this weight three times without getting winded.

Secondly, I didn't want to intimidate the legions of bodybuilders that were all around me (clearly, I can still bench press 500 pounds if I wanted to but why bother today. It's not worth having all these guys who spend most of the time here looking at themselves in the mirror get so upset).

Third, this was the only free weight left on the rack. 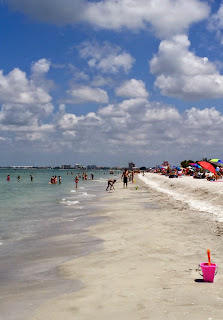 What do you do after an intense workout?

Right ... you head for the beach to show off your brand new body.

That's exactly what I did. Debbie had a full day of showing houses so I strolled the Pass-a-Grille sands from the condo to The Don Cesar. What a day, the beach was smooth and silken, the water was cool and the weather was perfect.

There was the one kid who kept throwing up in his sand pail and a woman who lounged by the waterside with a large tent wrapped strategically around her white body which was about 25% larger than the tent.

And there were THE guys who threw a football where everyone else tried to walk. Why is it that the only guys who do this are the ones that you know never made it on any real teams and try to look like they not only played but that they were the team leaders in pass receptions? One guy dropped the ball (actually it slipped right between his fingers ahead of me). A little skinny ten year old picked it up and hurled it 20 feet to the guy who threw it originally. Now HE'S a player 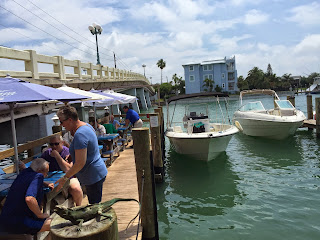 Time to head back. Had lunch time at Sea Critters on the way home. The TV at the restaurant was showing the Lightning playoff game, which sadly went the other way in the Rangers favor. It's okay ... we'll get them next game.