Gotta tell you ... the last few weeks have been inspirational ones for me.

USF had three events recently that made me proud to not only work for the university but also to be in the company of folks that have done incredible things with their lives. 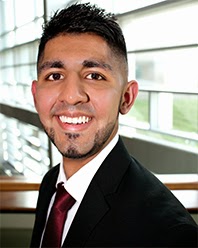 Gonzalez has worked in the tomato fields since he could carry a 30-pound bucket on his shoulders, spending nearly every weekend and evening alongside his father, a migrant worker in Immokalee, Florida. His father taught him that education was the best preparation for a different life.

Gonzalez had no idea what it took to get into college or even what college was about but he knew if he studied hard, got involved in sports and clubs, and enrolled in college courses while still in high school he might have a chance.

USF accepted him when he graduated. He is the first person in his family to go to college, where he thrives as a scholar.  He is a member of the USF Honors College, the Bulls Business Community, and Business Honors Program. Gonzalez is also received one of the very competitive Provost’s Scholarships. He also recently finished his T. Rowe Price internship in New York City as an intern with Deloitte, the biggest accounting firm in the US.

Gonzalez is an officer for several organizations, including the Accounting Society, the Association of Latino Professionals in Finance, and the International Student Association. He has been a mentor through Big Brothers Big Sisters and has participated in many campus service projects.
The young man who had never been outside of Immokalee, Florida has since traveled the world as part of his international scholarship learning about business practices from China to Italy.

He also spent part of it as a field worker in a North Carolina tomato field. 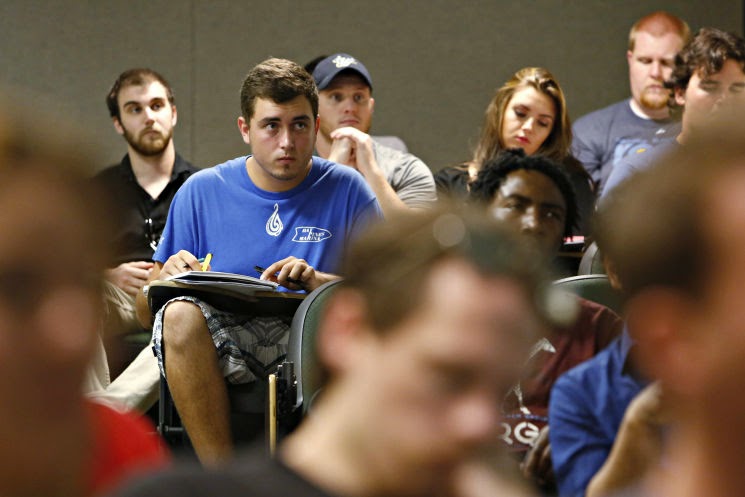 Dakota Rockwell made his very first speech at the College of Business Scholarship luncheon in front of about 300 people. He sat at the head table, between the husband and wife who had donated his scholarship.

He looked proud in his pinstripes, the new shirt matched his eyes. "Dakota has been a USF student for about 96 hours," the announcer said. "We welcome him, and are so glad this generous gift will help fund his future."

He got the letter in July, at his mom's house in Seminole. She never would have believed it. Not after everything that had happened. Dakota Rockwell, 20, had applied to the University of South Florida as a long shot, hoping — but never dreaming — he would be accepted. Then the admissions office emailed. He could start in August, in the business school.

Dakota's mom had dropped out of high school and gotten pregnant. Six years later, she'd had him. She raised both boys on her own, piecing together minimum-wage jobs, hanging clothes at a Bealls Outlet, Ross and Kmart. "She was always working at some consignment shop store, too," Dakota said. "To find the best bargains."

When Dakota was in kindergarten, his mom got married; she and her husband bought a house. She hung curtains, lit incense, laughed a lot. She called her younger son Pumpkin, cooked him chicken Alfredo, told him that clouds were angels.

He was 12 when his mom got divorced; 13 when he noticed her losing weight. She started sleeping more, stopped cooking. She tried to hide it, but she winced when she walked. She didn't have health insurance, or money to go to the doctor. By the time the pain was so bad she was screaming in the night, it was too late. Cervical cancer had spread through her pelvis and thighs.

He watched her lose 20, 30, 50 pounds. His older brother dropped out of high school to wait tables and help pay the bills. Almost every night, Dakota was home alone with her, a seventh-grader trying to take care of his dying mom.

"I taught myself to drive, drove illegally, to get her medicine and take her to doctors' appointments," he said. "She couldn't really eat with all the chemo, but she kept craving things. This one time, I got her a cherry pie. That was the last time I saw her happy. Then she threw it all up in the laundry room and just cried and cried."

He didn't tell any of his friends at school what was going on. That was the only place he could feel almost normal. But he kept missing classes. His mom needed him. On the last week of the grading period, he would turn in just enough work to keep from failing. "Every time I would get a report card, my mom would say, 'Let me guess, all A's," Dakota said. "And I would have all D's.

After he scattered her ashes in Millennium Park, something struck him. If he dropped out of school he would end up just like her: perpetually broke, barely able to pay the bills, no savings, no safety net.

He cut his hair, went back to school and started trying. It wasn't to make her proud. This was for him. "Everyone wanted me to talk to counselors," he said. "But I knew what I had to do."

A teacher who lived down the street, the mother of his two best friends, made him dinner, helped him with homework, told him to take the SAT. "I just tried to point him in the right direction," Maria Wyatt said. "He did all the hard work. He has an incredible drive."

The last semester of his first year in high school, nine months after losing his mom, Dakota made the honor roll for the first time. He framed that report card and hung it above the bed where she died. Three years later, he became the first person in his family to graduate high school.

All summer, he sweated cleaning pools, painting condos, hacking vines off fences. He hauled boats at the marina, moved furniture at an auction house, caught ladyfish to sell at the flea market: $1 per pound. Working seven days a week, he saved $700.

He would need more than that just to buy books.

A $5,000 Pell Grant would cover about half of his expenses; a Rotary Club scholarship gave him another $750. But if he was going to take classes full-time, he would have to lose some of his jobs. Then he wouldn't be able to pay his bills, or earn the extra $5,000 for tuition and fees.

After working so hard, after defying everyone's expectations, Dakota decided he wouldn't be able to afford a degree from USF.

He hung the acceptance letter on his wall.

His luck was again about to change.

An anonymous couple, alumni from USF, had created a new Good Karma Scholarship for "a College of Business student with passion and potential who needs some financial assistance in order to achieve their academic objectives."

The first $4,000 award, the email said, was for Dakota. "I couldn't believe it," he said. "I had already pretty much given up." He had finished the first two steps of his plan: graduate high school, earn an associate's degree from St. Petersburg College. But there was so much more he wanted: a business degree. Then an MBA. He hoped to get a good job, earn enough to buy a broken-down house in a decent neighborhood near a park, not to live in, but to fix up and sell. With the profits he would buy another, and another, and start renting those so he could buy more properties, maybe in Virginia or Vermont.

And some day, once he didn't have to struggle, he'd let himself fall in love, get married and have kids. And he'd buy them health insurance and life insurance and send them to college.

A week later, after he finally moved out of his stepdad's house and rented a cheaper room, he got a call. The business school was having a suit-and-tie luncheon to honor its scholarship recipients, and thank the donors. Would Dakota give the keynote speech?

He scanned the room, 300 people, most of the other students with their moms. Wearing his first suit (purchased by staff members at USF College of Business), he spoke about being on his own since he was 15, about everyone who had helped him, all he was going to do.

At the end, after thanking everyone, Dakota made a promise, "Your investment in me will be returned with interest." 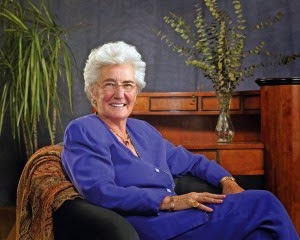 The story of Kate Tiedemann’s entrepreneurial success, a tale of hard work, passion and fortune, is nothing short of extraordinary. Hers is a genuine American dream story. An immigrant from Hamburg, Germany, Tiedemann endured an arduous steamship crossing from Europe to arrive in New York in 1955 – at the age of 18 – to live with an aunt. With limited English, she worked for two and a half years as a maid and a cook for former New York Governor Thomas E. Dewey.

Eager to acquire administrative skills, Tiedemann worked multiple jobs before landing her first job in the surgical instrument business as an assistant in the New York sales office of Storz Instrument Company, now part of Bausch and Lomb. “I loved the work and was fascinated by the instruments,” she said. She decided this highly precise, tool-intensive industry was for her.

Following the sale of Storz, Tiedemann and her boss launched an eye, ear, nose and throat division at Edward Weck & Company. Later she co-founded Sparta Instrument Corporation, which was eventually sold to Cooper Laboratories. After 15 years in the surgical instrument field, she felt ready to start her own business.

In 1975, Katena Products (short for Kate North America) was born in the basement of her New Jersey home. Tiedemann worked with ophthalmic surgeons worldwide to design and develop instruments for eye surgery. Today, Katena markets 1,400 products to more than 7,000 surgeons, outpatient surgery centers and hospitals in the United States, and, through a global network of distributors, to customers in more than 110 countries around the world.

“I loved the eye instrument business and there was never a day I did not look forward to going to work,” said Tiedemann. “When you love your work, it isn’t really work, it’s fun. Anyone who can say that is blessed.”

She has always had an emotional attachment to learning and education. While she did not attend high school or college, she says she has often wondered what more she might have achieved had she had a formal education. “My highest level of education is grammar school, but I spent my whole life learning and still continue to do that,” she said. “Most of what I know I have learned from others.”

Now ... she said ... I can have my very own college diploma hanging on my wall. But what makes her the happiest is that thousands of students will hang diplomas on their walls as well and she will help make that happen.
at September 06, 2014