A Run Through Memory Lane 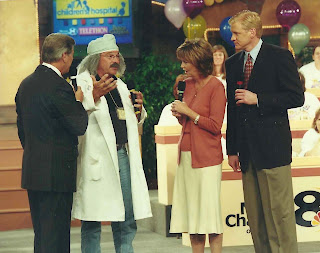 This was a reflective weekend for me.

I guess it was the invitation to appear on the 30th anniversary of the All Children's Telethon that started me on a journey through boxes of old pictures ... like this charming one of me dressed as Dr. Pete E. Atric on the telethon about 10 years ago.

My alter ego at the hospital was complete with a bad German accent that could only last for a few minutes before it sounded like a combination Yiddish and Cuban with a touch of Chinese. Needless to say ... when they asked me to cohost a segment they had to use subtitles. 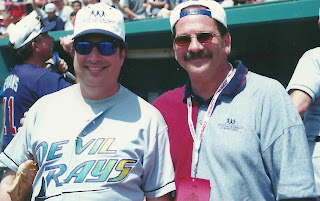 Ahhh ... This was from the Baseball for Kids weekend held with the Major League Alumni Association. Every year, baseball legends and celebrity wannabe baseball legends came in for the big game. I'm here with John Lovitz. Remember him? He was on SNL for years and was also the nasty agent in League of their Own.

When John came in to bat, he was on his 13th strike when he pointed to right field ... just like Babe Ruth. Unfortunately, he hit it straight up in the air (about ten feet) and was thrown out. He calmly looked at the crowd and said, "So ... you thought I was gonna hit a home run or something? I was just pointing to the spot I would hit it." 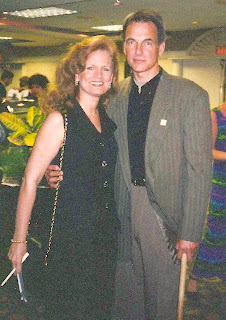 Speaking of the Baseball weekend, Mark Harmon used to play once in a while. Debbie, who was my girlfriend then, felt sorry for him because his wife didn't come ... so she filled in.

Fortunately, it was only for pictures.

I remember that she disappeared for a few days after this picture but I saw her on Monday and she swore to me they were just friends. 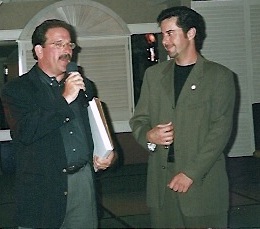 That same night (while Debbie kept Mark busy) I took Jonathan Silverman (Weekend at Bernie's) to a Bat Mitzvah Party in the next room at the TradeWinds.

The Trade Winds bumped a Bat Mitzvah party to a smaller venue that night so we could have our Baseball for Kids party. They were so good to us and the parents were so understanding that I asked Jonathan if he would come with me to surprise the Bat Mitzvah girl (By the way for my sister, Keli, that's the female version of a Bar Mitzvah) and give her a present. 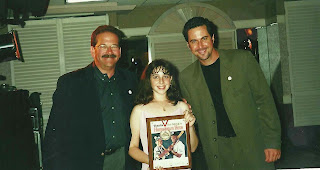 Well, it worked out great. The kids swooned over Silverman. All of them knew who he was and he was a big hit.

Also turned out that his dad was a rabbi so he had lots of stories. 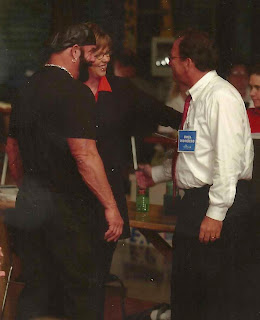 Taken right before a segment of the telethon, it's Gail Sierens, me and Randy "Macho Man" Savage. Randy passed away a few years back. Love this guy. He was a wrestler with a very distinct gravelly voice and a heart of gold for the kids.

Gail was comparing notes after she had vocal chord surgery and sounded alot like Macho Man. Between the two of them, I could only figure out one or two words that year. 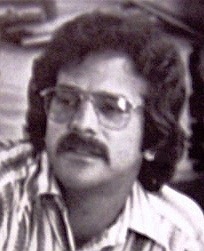 Okay ... enough about my walk down memory lane. I mean really ... How many moustache pictures can I expect you to handle?
at June 03, 2013