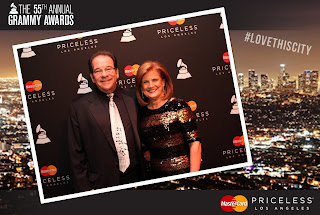 My blog entries have gone from periodic to rare. And I've really got lot to talk about ... like my daughter's wedding and The Grammys and Sammy ... and More Sammy.

So ... I'll start with the Grammys (because I don't have all the pictures from the wedding just yet).

Deb and I bid on a great package at a Cancer Society fundraiser last year ... a weekend at the Grammys including airfare, hotel. the show ... and an after show party. Cool huh?

"That was a trip to LA and TWO TICKETS to the GRAMMYS!" 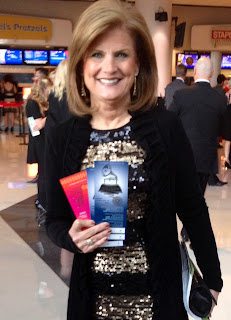 Needless to say we were the reluctant high donor at the event but we had the primo package. The tickets only go to members of the music industry so it is a bucket list thing (better be) and we were thrilled (pissed off) to have bid on them and knew it was going to a good cause (I think we might cure cancer for what we paid) but I'm not one to complain (damned auctions ... WHY do I do these things) and Debbie was thrilled (after the paramedics revived her).

There she is holding the tix in the lobby of the Staples Center before the show. 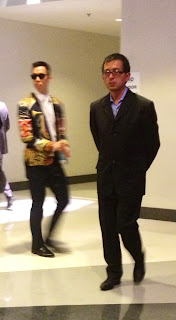 Here are a few of the other members of the music industry ... maybe these were the ushers ... who knows ... everybody looked like that. 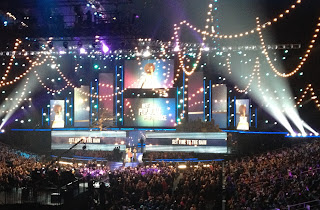 Okay ... I have to admit the show was fantastic and the seats were actually pretty good (once the binoculars adjusted) ...

... and the after party ... was spectacular. Unbelievable food, circus acts, great music ... 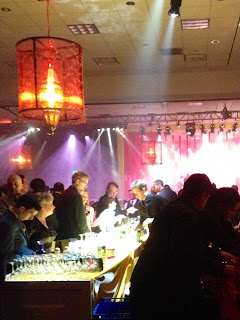 
Seriously though ... it rocked! 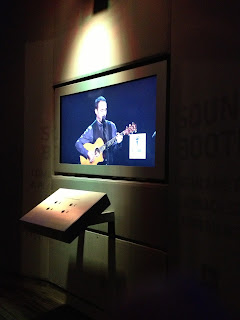 The next day, we got a personal tour through the Grammy Museum and it was very very cool. Michael Jackson's coats to Les Paul's guitars, Clive Davis music auditorium,  and an interactive music production sound system that could be adapted to whatever form of music you wanted ... sing with Whitney ... change the pitch ... you name it. 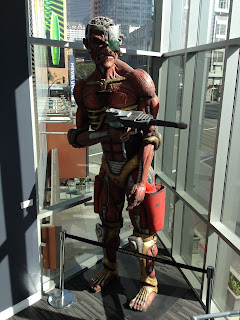 Can't remember this guy's name ... he was about 12 feet high and toured with some Metal band and sits on the stairway ... reminded me of Debbie a little when she found out how much I spent on these tickets!