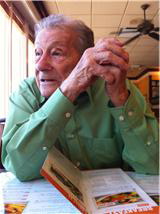 Deb looked at me and just shook her head. "Okay. Listen to this message that your dad left."

Joel's dad ??? I better tell him that we had to let the butler go ... I guess you could chalk this up to the after-effects of the anesthesia ... but that might be giving the sedative too much credit. Sammy is pretty lucid now (for Sammy).

He's back in Menorah Manor now ... by the way ... and happy as a clam in his chair with the big headphones. Everyone is spoiling him rotten and he has his usual string of terrible jokes for everyone who listens.

One of his "girl" friends told us the other day, "We love Sam. You know .... he's the only one who actually still speaks when we have dinner. The other men just sit there." NOW I understand.

Today, he had an appointment with the orthopedic surgeon who did the hip surgery. I met him in the office. He was in a wheelchair with these super tight pants on ... the zipper was stretched to the max and the top button was broken.

"Oh no Joel. These are my old pants. See? I have lost so much weight that they fit now."

Once in the exam room, the nurses double teamed him in the wheelchair to take out his sutures. One pulled down his pants while the other had him leaned against her to the side while she held him next to her.

"What did he say?" The nurse who had him in the sleeper hold asked.

"That's not what I said (NOW he hears)! I said 'blow in my ear and I'll follow you anywhere'". Then ... he put his hand around her waist and squeezed. 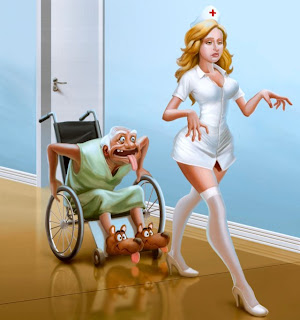