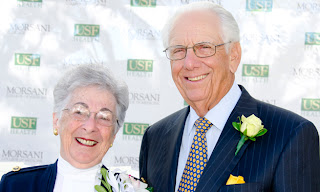 Christmas came early this year for USF Health ... thanks to the REAL Mr. and Mrs. Santa Claus.

We know them by their earthly names ... Carol and Frank Morsani. They also happen to make wishes come true all year long. Yesterday, Carol and Frank gave a special gift of $20 million to help build a new medical school on campus and ... in honor of their over $37 million total giving to USF Health ... there will now be a Morsani College of Medicine in their honor.

Of course, Santa and Mrs Claus like their anonymity ... preferring chimneys and late night visits to fulfill wishes. The Santa Morsanis are just as happy remaining under the radar. In fact, it took many conversations to encourage Frank and Carol to put their names on the building. Eventually they conceded ... not for any egotistical reasons ... but knowing that their names would encourage others to give.

Frank and Carol met in high school in Tulsa, Oklahoma. If you ask him about his background ... Frank will tell you ... "Well, I'm just a lucky car mechanic." Actually, this "lucky" car mechanic worked hard for years in the automotive industry, managing dealerships around the country with Carol and his daughters faithfully by his side. Eventually he had his own dealership .. and then another ... and then another ... He became very wealthy. But he and Carol never forgot their roots.

Frank's philosophy is that everyone lives their lives in three segments "First you learn ... then you earn ... and during the third segment of life you should return."

And he is certainly "returning" to many in a big way. He and Carol have given millions to the arts, health care and education. His latest gift is his largest ... and the largest single gift to USF ever. Yesterday we held a press conference ... over 500 were in attendance: Frank and Carol's friends, students, media, professors ...  Dr. Judy Genshaft introduced Frank and Carol to the crowd ... Frank spoke ... emotionally giving his thoughts about the university and his respect for the leadership. I followed him as did Dr. Steve Klasko, Dean of Health and one of the main reasons that Frank and Carol gave this gift. We spoke about how wonderful his gift was and what a great legacy he has left for so many students. We thanked him for his friendship ... he and Carol are the youngest 80 year olds I have ever met and such a delight to hang out with. Two medical students presented the couple with a framed proclamation, telling their personal reasons they were so proud to be there.

After the event, I spotted Carol talking to one of our physicians. She laughed as she held the bottled water that was passed out to the huge crowd with her name inscribed on the label. "Well, look at this. I have my own water! Somebody asked me how I look so young at 80 ... now I can say, it's because I bottle my own water." 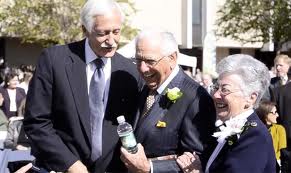 This morning, Frank called Dr. Klasko and called me to say "Thanks for such a wonderful day. I just wanted to tell you how much we appreciated it."