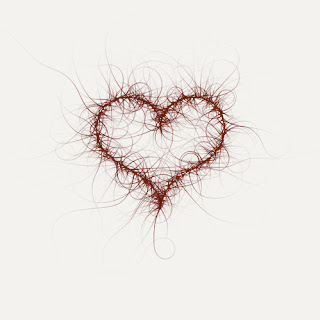 Ever heard of it?

You're probably asking yourselves ... "Why is he talking about ablations ... in fact what the heck are ablations anyway (and why should we care)?"

If I didn't just go though one ... I'd probably be happily ignorant and you wouldn't have to hear about it. But of course ... it's all about me ... and if you are tired of hearing about my medical problems ... stop right here. 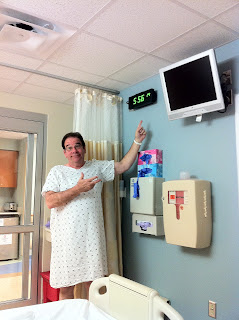 At 4:00 this morning ... when nobody but insomniacs and  insane people are awake ... I stumbled into the shower and got dressed for my 768th trip to Tampa General Hospital ... this time to have catherers poke around my heart to find a place that is misfiring and causing "skipped" heartbeats and then hopefully ZAP it. This is the Momberg definition for Ablation.

My sainted wife drove me to the hospital, patiently listened to me whine and even took these pictures of me posing in the room pointing at the clock.

An impressive team of nurses (who obviously have done this before) asked me if I was a drug addict while starting my IV, putting on my booties and testing me on how well I remembered my name, birthdate and why I was here (at least 50 times) . Apparently, many people must either lie about it or get it wrong alot. I wanted to test the system by telling them that I was Kirk Douglas, 150 years old and was here for plastic surgery but they were armed with lots of needles and I thought better of it. 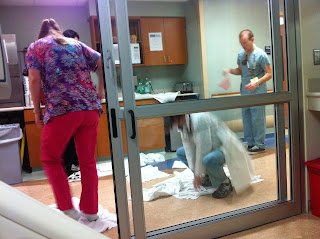 Just about then ... one of the patients outside my room turned on the water faucet after he got a cup of coffeee (hey ... how did he get to drink after midnight?). He had his arm in a sling and was trying to hold the coffee and turn the water on with one hand. No ... I don't know why.

But ... all of a sudden ... the faucet blew off and the water gushed out of the spigot, covering the entire kitchen area and flooding the floors. Our nurse sprung into action and had the good sense to turn off the valve while others threw towels over the floor.

Unfortunately, that was the only excitement for the next two hours while I waited my turn to be wheeled into the Cath Lab. My PVCs (heart arrhythmia's) were busy doing a Jerry Lee Lewis arrangement inside my chest as I nervously waited. Debbie tried to distract me by laying on my arm, reciting "Our Father" and reaching into her bag for the beads.

I think it was supposed to comfort me.

Two techs showed up at about 7:30 to take me into the Cath Lab and presented me with a couple of more release of liability forms (I had signed 10 while waiting) One of the forms was about a procedure that involved shoving a tube down my throat to check for blood clots.

Stupidly, of course, we all sign these forms allowing anyone to do things like rip trachea, injure lungs or do other damage that MAY occur in the course of the procedure while you are asleep. Can you imagine carrying your own set of forms to work releasing you from liability if you happen to run over someone in the parking lot, cut off someone's nose in a salami slicer or staple someone to a desk in the course of your daily job duties?

After signing paperwork (tied by restraints to the bed, by the way) The Anesthesiologist emerged . He was the second act ... following the techs shaving my groin and strapping me down.

He too asked ... "What's your name ... DOB ... and why are you here?"
Oh my God ... HE doesn't know? I, of course, told him.
"Okay,": he said in an accent I couldn't quite place, "Ve tink dat ve might give you just a leeeeetle bit of medicine in the beginning so dat your PVCs vill be easy to see."
Easy to see? My PVCs were outside of my body at this point..
"When do I get the General Anesthesia?"
"I don't tink I geeve you dat."
'You mean in the beginning?"
"No ... ever."
He probably saw the color drain out of my face and onto the floor."
"Don't vorry. You know us all here now ... ve vill control your pain."
"Wait ... wait ... there will be two catheters up my groin and one in my neck ... right?"
He hesitated.
The Cardiologist popped in mysteriously (Act III) on the other side.
"Maybe three."
Dry mouthed .... "MAYBE THREE?"
"We'll see ... you will be fine. When we find the PVCs after about an hour or so, we will give you more medicine."

I couldn't see what they were doing after that but felt pressure in my neck and groin .... heat ... then ... I opened my eyes enough to see through some sort of Vaseline that covered my lids ... as the techs were taking off the restraints and asking me questions that made no sense. My throat felt like daggers were in it, my neck felt like I had been hit by a baseball bat ... in fact my whole body felt like it had been hit by a baseball bat. AND I was peeing through a catheter. The worse feeling on earth.

Someone ... somewhere said that they did general anesthesia after all.

The doctor was standing over me with his plastic heart model telling me stuff that I could not understand in the slightest. I couldn't focus ... until I heard ... "...so we stopped. But there's another procedure we can do."
"What?"
"You know ... you just rest. We'll talk later." 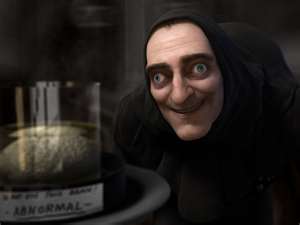 I was rolled into my room and Debbie was at my side. She was still praying I think. I don't remember ... I just kept asking the nurse to get the catheter out of my bladder and let me stand up.

Debbie looked at my neck and said, "You look like you have a giant goiter on your neck."
"Great."
From the back, I looked like Igor from Young Frankenstein. It even moved around.

Anyway .... after a few hours the pain subsided ... The doctor came back in my room looking for ... I KID YOU NOT ... his plastic heart. Finding it, he told me what happened:

I happen to be one of the unlucky 10% of ablation patients whose area of electrical interference is on the outside of the heart ... in an area that is very hard to reach with the standard procedure. There is another way to get it ... from a needle to the chest ... but it is only performed at 3 centers around the country.

There is also another drug regimen that is offered as an alternative with much less risk ... I chose that one, for now. There is good news: These PVCs are NOT life threatening ... just very uncomfortable and management of the discomfort by medicine might be the answer.

More good news: A little while ago ... I walked without falling down and my hump is about half the size.

gosh what an eventful hospital visit. I hope everything in its place and a-ok?

ablation does NOT sound fun.

@Gillian .... Tx. What fun huh? Yes everything is in its place I think. For the time being.

The shaving sounds like a pledge act at GA. We hope that your drug regimen will be successful and your PVCs will be controlled. Steve & Leslye

My first thought was that you were talking about endometrial ablation and then I thought, "either Joel is running out of things to blog about or he has been keeping a BIG secret!" Seriously though I love how you can find irony in EVERY situation. It must be a gift AND a curse. Thanks for the morning laugh.

PS - Sending wishes for better living through chemistry. Debbie needs a break from your visits to the hospital.

@Wendy ... okay you caught me ... don't tell anyone about the endometrial stuff. Debbie went home last night ... you think she'll come back? (I made her leave the beads).