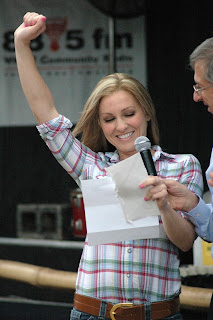 Yesterday was THE day for medical school seniors across the country.

"Match Day" is the day the graduates find out where they will be doing their residencies. They spend months interviewing at different universities and hospitals around the country ... vying for coveted residency positions within their specialty areas. They then rank these in order of preference ... the schools they interviewed with do the same. The results come in and each "resident" is notified of the results at MATCH DAY in front of friends and family. Sometimes they get their first choice, sometimes their second and sometimes it's a fourth or fifth ... sometimes they don't get a match.

For my daughter Nicole, her USF Match Day was held at Skipper's Smokehouse (a funky bar/restaurant/music venue that is frequented by the student population. It's a relaxed atmosphere for "already stressed out" group.

So ... yesterday ... 120 of Nicole's classmates gathered as each one went to the microphone, called out their names and specialties ... tore open the envelopes ... and announced their matches. Pretty heady stuff, huh? Fortunately, those that didn't match are told ahead of time so they don't have to stare at a blank envelope. There were only a handful of those ... and they were rebatched and all got positions in other specialties.

Nicole was fashionably late ... not by choice ... because of bad compass coordinates. There were a few names called out (at random) before she arrived. One young lady read her city and specialty and said hello to her husband in Dubai (our Match Day was being streamed via the web). Another "couple" read their joint placement in Alabama ... he was a radiology resident and she was in pediatrics. More names ... more cities ... Boston, Chicago, New York, California ...

By the way ... I'm looking for the name of the resident who got Las Vegas as a placement yesterday. If he's reading this ... I've got a cash deal for you if you want to let me take that one myself ...

Then it was Nikki's turn.

My heart was on the floor. It was like watching her graduate from kindergarten all over again ... hoping she (and I ) would make it through. She opened the envelope and said "Nicole Momberg ... Internal Medicine ... (sobbing) ... Savannah (sniffles) Georgia (bawling) ..."

Her fist pumped the air and she came over and gave me a great big hug as she whispered to me "Dad ... quit crying ... you baby ...I love you".

Everyone asked me if she really got her first choice because she was so low key ...
"Yes, she did  ... that was just her being overjoyed and me happily crying like a baby."
at March 19, 2010

Congratulations to your daughter and proud maw and paw.

I sort of remember that from the old GM days.
"happily crying like a "

Congratulations, Nicole! What a proud day for all of you. :-)