SAMMY: The Novel (An Overview) 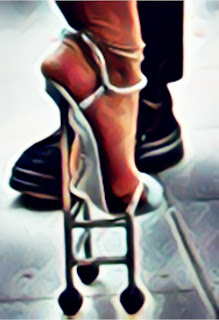 So ... I called my good buddy and excellent writer, Dave Scheiber, to help me write an overview to pique the interest of publishers. The stuff that Dave wrote made me want to read my own book! We combined our efforts and here's what we came up with:

Sammy Levine, 86-year-old resident of Star of David nursing home, was not happy with his daily existence and dreamed of taking one last trip with his wife Esther (presently residing in an urn on the third shelf in his room). Sammy was careful about not exposing his plan to anyone, especially his son, Barry, who dutifully visited regularly and tried to make sure that he lived out his remaining days comfortably.

Through a carefully choreographed plan, Sammy managed to access personal information on three recently deceased residents from the nursing home’s computers. Then he applied for and obtained three new credit cards. Armed now with available cash and credit, he loaded up Esther, a knapsack and a walker and headed back to his hometown of New Orleans, where he would visit the places and people he wanted to see before he died.  It was a bucket list of all bucket lists concocted to take care of unfinished business – and serves as the engaging foundation of Sammy: The Novel.

This is a unique, coming-of-age road trip featuring a feisty, often salty and insensitive senior citizen, who still has some coming of age to experience in his twilight years.

It is the final ride of a lifetime that involves a most unusual cast of characters – a smart, streetwise stripper named Destiny with a soft heart beneath her hardened demeanor; Sammy’s musician son Barry, who longs to rekindle the magic of his old recording and touring act, the Chosen, while keeping tabs on his wayward dad and helping his career-minded daughter, Wendy; an array of despicable street thugs; and one very special urn on which this book turns ... containing the ashes of Sammy's late-wife Esther, whose posthumous presence is central to the novel’s unfolding mystery.

On one level, this is a story that takes readers on a wild, raucous journey through the gritty and dangerous streets of New Orleans and into Sammy Levine's complex past, as he tries to make amends for shortcomings in his life and a lingering guilt that drives him to make a daring break from his nursing home and embark on the adventure of a lifetime – even as his life nears an end.

Yet on another, it is the tale of a father and son who long-ago drifted apart and took one another for granted as they grew older and faced their own mortality. But they gradually come to bridge that widening gap as the secrets of Sammy's hidden past and new life come into sharp focus. And the high-octane action careens into a surprise revelation that makes this story about an old man on a mission to make things right more you'd ever imagine.

One of his first stops – and most important as it turns out – is a strip club on Bourbon Street, the kind of establishment that neither Sammy nor Esther had ever frequented. It is here that he meets Destiny, whose real name is Audrey, and she is thrust into the unwanted position of Sammy’s caretaker soon after he steps into the club and finds himself and “Esther” threatened by a lowlife regular.

The plot takes off from there as Sammy, determined to push on in spite of his weak heart, proceeds to check off crucial items on his list – exacting revenge on a drug-smuggling fishing captain, spending time in an old furniture store that holds a key to Sammy and Esther’s past, and an aging corrupt New Orleans attorney Sammy confronts and forces into spilling his own dark secret.

Along the way, the emboldened nursing home renegade is joined by a colorful cadre of Destiny’s stripper friends, who revel in supporting him on his quest. And there’s Destiny/Audrey, who finds herself growing increasingly attached to the old man in spite of his rough edges, the multitude of headaches he causes for her – and the life-and-death situation they find themselves in unexpectedly.

But there is another unexpected twist to come – something Sammy has kept from everyone in his midst that was the fuel for this last ride. And it finally comes to light in a frenetic conclusion, a celebration he planned for Esther by the New Orleans lakefront, where she always wanted to live but was too expensive for Sammy. The fragmented pieces of his bucket list now all make sense – even though it’s the last thing Destiny, Barry and Wendy ever expected to hear. And one final, life-changing surprise awaits even then.