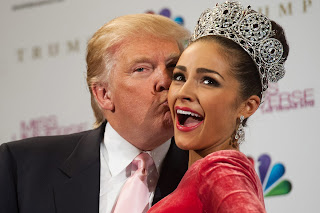 Interesting times we live in.


The Trump bus tape is the latest of those precious moments in the presidential campaign that SNL prays for. No one would believe it. No matter which candidate you love, hate or don't care about as long as the opponent doesn't win ... you gotta admit this was an extra painful moment for the Donald.

Okay ,,, we've all heard the rhetoric: "locker room talk", "insulting to women", "all men do it", "a plot by the liberal media" or "Donald just doesn't really mean what he says". Well here's another take on it. I have to admit, it wasn't my original idea. I credit one of the guys I work with (who will remain nameless because I didn't ask him if I could use his name and he might be a little less careless politically than I am).

The Donald is Steve Carrell.

Whether he is in the Office or 40 year old Virgin or Anchorman ... he's always the inappropriate dorky guy who makes you want to cover your eyes in embarrassment when he says things like:

"Yes it's true that I, Michael Scott, am signing up with an online dating service ... I need a username and I've got a great one. "Little Kid Lover". That way people will know where my priorities are." (Office)

"People seem to like me ... I like ice cream and really enjoy a nice pair pf slacks. Years later a doctor will tell me that I have an IQ of 48 and am what some people might call mentally retarded."(Anchorman)

"Holding her breast was like holding a bag of sand."(Virgin)

"Wikipedia is the best thing ever. People can write anything they want to about any subject. So you know you are getting the best possible information." (Office)

Carrell would have definitely said "I moved on her heavily. In fact I took her furniture shopping. I said, I'll show you where they have some nice furniture." ... or ... "I've got to use some Tic Tacs just in case I start kissing her." ... or ... "When you're a star they let you grab them by the ..."

May we display your header on our new site directory? As it is now, the site title (linked back to your home page) is listed, and we think displaying the header will attract more attention. In any event, we hope you will come by and see what is going on at SiteHoundSniffs.com.