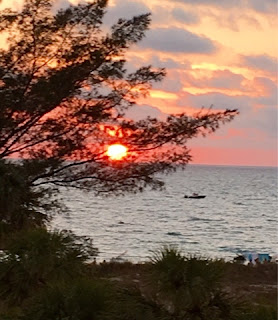 Pass-A-Grille is an interesting little community.

I remember when I first came to St. Pete in the 70s, it was the place I wanted to be. I rented a funky little house a block from the beach right behind Shadrack's (a biker bar that's still there today). Down the street was Hubbard's Pier which is also still there but no longer owned by the Hubbards. The beach community was very laid back and relaxed until sundown when fights broke out just about every night at the bar.

I was teaching 6th grade at Canterbury School and my friend Karl lived down the street from me in the White Houses (cottages across from the point). Before Karl lived there though he lived on my floor in his sleeping bag. Lots of interesting stories in those early years.

Karl became the inspiration for my first novel, Home Movies. My protagonist was even named Karl "Buddy" Rosen and taught Kindergarten at a school on Pass-A-Grille Beach.

In doing research for my book I found out that Pass-A-Grille was a derivation of the French (name) Passe aux Grilleurs," or Passageway of the Grillers. The Grillers would be the fishermen who used to grill their catch of the day on the shore when the island was still a post for pirates. 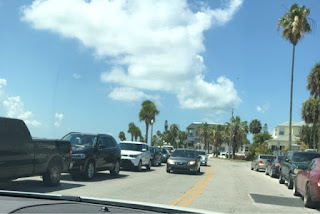 No pirates or grillers around today. There's no place for them to park!
at May 30, 2016