We went to the Rays game last night. We won, by the way ... 5-3 against the Arizona Diamondbacks.

It's been a tough series of games after our unprecedented record. We had the best record in baseball for the entire season ... until a few weeks ago. 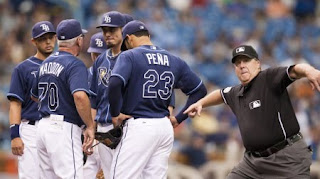 I looked for Manager Joe Maddon but he was relatively quiet this game.

There's another rule: You can't argue with an umpire about a balk. So ... instead ... Joe went to the mound to argue with his pitcher within ear range of the umpire ... went something like this:

Maddon: "Matt, how could you possibly balk right here? Two nights in a row, how could we possibly have that same balk call called against that we pretty much do all the time".

Cederstrom (ump): "Are you talking to me?"

Maddon: "No ... I'm talking to my pitcher. (to Garza) Matthew ... every other pitcher in the big leagues does this on a consistent basis and never gets called for this."

Garza held his glove in front of his mouth so he wouldn't laugh. Cederstrom ejected Maddon for the third time this season.