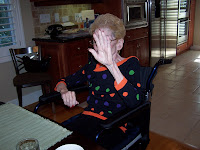 Okay ... one more Esther story. It's my wife's favorite.

When Debbie visited my parents in New Orleans early in our relationship, we met them at a great little place in Metairie called Foodies. Foodies carried all the best New Orleans restaurant dishes "to go" and had a wide selection of salads and meats and breads that you could eat right there. Food selection will be important later in the story.

We ordered our meals and took them out to the patio to eat. As we started our lunch, I noticed that Sam had a pretty big piece of lettuce sitting on the bridge of his nose UNDER his glasses. Of course, the logical question going through my mind was ... how the hell did he get a piece of lettuce under his glasses and on his nose ... AND how did he not see or feel it. But then I remembered that this was Sam ... and not an ordinary human.

So I decided to mention the obvious ... "Dad, you've got a piece of lettuce on your nose."
Sam looked at me blankly and asked ... "What?"
"I said ... you have a piece of LETTUCE on YOUR  NOSE".
Sam was hard of hearing so I repeated it slowly and pointed to my own nose to help him understand.
He looked at Esther ... "What did he say, Esther?"
Esther replied, not bothering to look at Sam  ... "Don't answer him Sam."
I looked at Esther and looked at Debbie who was starting to spit up her food because she was trying not to break up laughing.
"Mom ... look at Dad's nose. There is a piece of lettuce UNDER his glasses."
Dad shook his head disgustedly and never missed a bite.
Esther looked at me and said ... "Joel don't make fun of your Father."
Debbie ... being the nice supportive person she is (so unlike my family) ... said, "Esther ... there really is a piece of lettuce under Sam's glasses."
Sam finally stopped eating, raised up his glasses and a piece of lettuce dropped on his plate ... "Hmmm, how did that get there?"

Esther looked at everybody's food, crossed her arms and said ... "Well ... DEBBIE is apparently the only one having salad."
at December 06, 2009