How You KNOW If Someone Grew Up In New Orleans

Camelia Grill ... This was the mecca for late night dining when I was in high school. Behind the counter were Harry Sr., Marvin, Harry Jr. and Chef. The grill was known for making the ABSOLUTE best hamburgers in the world (and they are still open on Carollton Avenue.) Also .... Freezes, pecan pie and they used to have a "cannibal plate" with all raw meat. 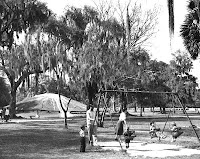 The Zoo ... Okay, now they have the NEW Audubon Park Zoo that is spectacular but they will never have another Monkey Hill where kids could run up and down the tallest hill in New Orleans (about the height of a one story building) ... or Itema the elephant (a sickly old pachederm named after the newspaper) ... or Shoot the Bear game ... or "Wake up the birds!" when you were in high school and drove through the Park late at night screaming "Cawwwwwww"!

Morgus the Magnificent ... he was the New Orleans version of Dr. Paul Bearer. His sidekick Chopsley was always messing up an experiment or two during the commercial breaks of The House of Shock Theater.

Morning Call ... No Cafe Du Monde for the natives. We all used to hang out at Morning Call (now relocated to Metairie) where the French Market is today for coffee and donuts (cafe au lait and beignets).

The Raven ... best bar uptown with Percy the bartender and at least three good fights a night.

F&M Patio ... we used to have parties there and actually (in high School) produced concert/dances at this dive with great acts like Willie Tee and Deacon John. It is STILL there and STILL a dive. Our "company" was called "Hammercheck Productions" ... it's a name derived from what every guy growing up does as a stupid trick to other guys. Whispers something in their ear while hitting them right between the legs. We called it hammercheck (bet you did it too).

Fortier/ Warren Easton/ Newman/ Jesuit High School ... depending on your economic standing you would have gone to one of these or had lots of friends there. The last two are private. The Mannings went to Newman. Fortier was my school. There were two entrances ... the Nashville Avenue side (where you could only come and go if you were a "hood") and the Joseph Street side for everybody else. There were only two classes of kids there. If you chose Nashville and you were not a hood, you would be seriously killed.

Sno Balls ... not the kind you throw ... these are the kind you eat. We used to get them at Rendon Inn but there were famous places across the city for these creamy ice sculpted syrup laced treats.

The Blue Room ... at the Roosevelt Hotel was the nightclub for great entertainment.

Perlis ... the only place to get really cool clothes.

New Orleans Night People .... Great TV late night show that was live atop the TV studio in the Quarter. It was the original Mary Hartman type talk show with guests like Harry the Singing Mailman (who had a terrible voice) and Ruthie the Duck Lady ( famous as the old lady that walked through the Quarter with her pet duck trailing along.)

I love your blog and your homage to New Orleans. Having family in Bay St. Louis I spent many summers exploring New Orleans and you brought bake many fond memories.

Camelia Grill - We have a picture of the Camelia Grill up on the wall bought in New Orleans about 18 years ago. The memory still makes me smile.

Ponchatrain Beach ... My parents would take us here as a special treat when we visited the Gulf Coast. It was falling apart at the time and I thought I was going to die on the zephyr.

Sno Balls ... I still crave these with cream topping (sweetened condensed milk for the rest of the world). When we lived in Boise I talked the local snow cone place into offering cream topping and it was such a hit they gave me free snow cones for life.