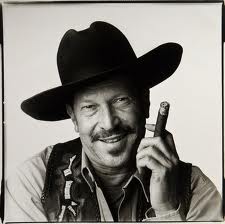 It's been a while since I updated my blog. Here's what's been happening ...


1. Friday night, we were cowboys.

Note: i've mentioned this in prior blogs. Jews really don't make great cowboys, except for Kinky Friedman who is the original Jewish Texas singing cowboy who did such classics as "They Ain't Makin Jews Like Jesus Anymore" and "Get Your Biscuits in the Oven and your Buns In the Bed" 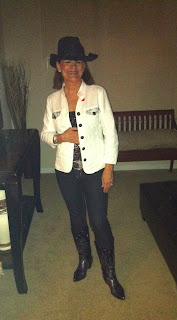 I was as close as I could be to looking like Kinky while Debbie was a better dressed "cowperson". It was the Cattle Baron's Ball. Held at the Tampa Bay Times Forum, the Ball was for the American Cancer Society to raise money for cancer research and treatment.

The highlight (and lowlight) of the evening was the auction package we bid on. It was a weekend at the Grammy's ... complete with a post party, hotel, air and other cool stuff.

Only problem was ... I thought it was for four people (it was for two). I overpaid. Debbie and I will take only one trip next year. 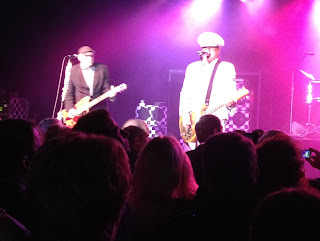 2. Saturday night was The Magnolia Ball for Moffit Cancer Center.

Not sure why it's been called the Magnolia Ball. There were no magnolias, the place it's held is Ala Carte Pavilion and John Gruden was the host (not a flowery guy). 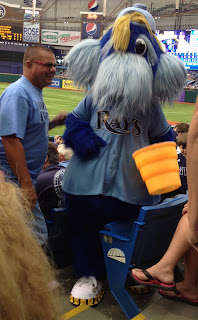 3. Sunday we watched the Rays beat up on the Minnesota Twins.

Actually, Debbie gave her ticket to son, Josh, who is a diehard fan. He and I ate peanuts, traded insults, laughed at Raymund, ate more peanuts ... and had a great time.

By the way Josh, if you are reading this ... I AM a good driver and I like the route I take to get to the game. Your route sucks. My way leads directly into the parking lot ... when I remember where to turn ...  and you owe me change from the Dipping Dots or whatever the hell that new ice cream stuff is.

It was a Women In Philanthropy Board event. Auburn has a companion organization to our USF Women In Leadership and Philanthropy group. We visit each other every year or so.

He followed the cat.