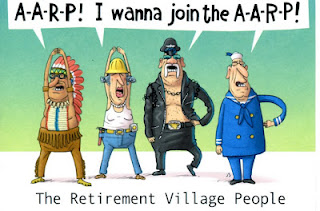 Friday night, we went to a 60th birthday surprise party for my friend Ray.

When you are 60 ... you are easily surprised. (Mainly because you can't remember how old you actually are). There were about 50 people there ... all waiting to jump out and yell: SURPRISE as Ray walks through the door.

Of course my Brother in law Tom and our friend Doug put together some very embarrassing slides of Ray for a presentation after dinner. You can tell how old someone is when they say "slides" instead of powerpoint ... so I have busted myself. Apparently, Tom and Doug thought they had slides too based on how many times the system crashed during the show. There were pictures of Ray in diapers, on a stripper's pole, with some very friendly male companions ... all had superimposed Ray head shots ... and all were certainly done by some 13 year old that Tome hired to do AV work.

My one job was to push the button of the CD player (vintage 1982) which was supposed to be cued to YMCA. I screwed it up. The song was some ballad that had nothing to do with the picture of Ray with the other Village people ... eventually it played on it's own ...  three "slides" later.

After the show, a couple of other friends reminisced about past good times (although they had trouble remembering times, dates and people).

The party ended at 9.

I love your bogs. You are one funny guy, glad to call you friend!!

Thanks pal ... Thanks for reading!