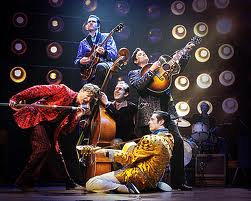 If you haven’t seen Million Dollar Quartet … see it.
I should have said if you haven’t HEARD Million Dollar Quartet  … hear it! Both the music and the musicians are superb. The guy who played Jerry Lee Lewis was unbelievable.  They were all very good … but he was by far the best.
The theater was “Off-Broadway” … New World Stages ... the perfect venue … small and intimate with a kick ass sound system.
Oh, I almost forgot … there was a pre-show concert behind us. I thought it was part of the show because I've never heard anything like this in an audience before.  A lady in the very last seat of the back row went nuts.She screamed to her husband/partner/embarrassed seatmate.

Today was shopping day.
For me, it took so long it was a like a lifetime. We stayed in Macy’s for a whole hour. To Debbie it was not enough time to even do a reconnaissance mission. I bought a coat. It was 75% off of whatever ridiculous price they said it was priced at … something like $5000. So I got a “real deal”.
Debbie “looked at” a pair of boots. 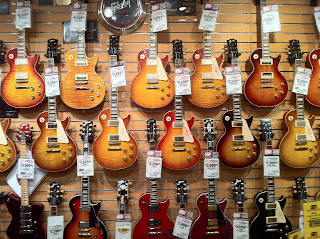 But ... the best part about today was our trip to Sam Ash to check out guitars, keyboards, music sheets, and other great stuff. There was a very cool Kurzweil piano all hooked up and ready to play.

I settled in and did a little Dr. John riff (my apologies to the Doctor). It was only a few minutes of some random chords when I heard a voice from the other keyboard rack say, “That was too short …  keep going …”
He was playing a swing rhythm that rocked.
We traded off for a few minutes … he was VERY good. I know he must’ve been a local musician at the very least. He had the grey ponytail thing going and was wearing a long cashmere coat so I assume he was not the starving kind. He was also buying out the store.
He reached over to shake my hand. In musician speak that means "You didn’t screw it up TOO badly".
at January 22, 2012

No Violins for me?