Kick It To the CURB 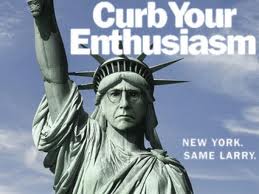 Curb is back for the 8th Season.

If you haven't ever watched the Larry David HBO series, Curb Your Enthusiasm ... I can only say that you have been missing the best TV Comedy series ever written (except for Seinfeld ... which of course was also written by Larry David).
In honor of Curb's return, I took a look back at ... what I consider ... some of the funniest moments. Curb fans ... tell me yours. 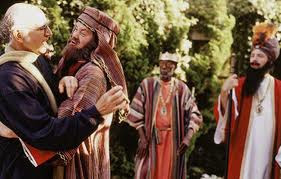 1. Mary, Joseph and Larry
(Season 3, Episode 9)
Irreverent in every sense of the word, this one finds Larry feeling extra-Jewish when his Gentile wife, Cheryl invites her family home for the holidays and turns it into an unabashed celebration of Christmas, with extra helpings of Jesus. Larry is offended, they're offended that he's offended, he's offended the they're offended that he's offended... in other words, it's perfect "Curb" material. This episode has some of the show's most expressive close-ups of Larry biting his tongue during uncomfortable moments and trying and failing to hide the true feelings that radiate off him in hostile waves. The final scene ... with Cheryl and her parents confronting Larry over having thoughtlessly eaten the centerpiece of a gingerbread manger scene, Christmas cookies shaped like Mary, Joseph and the baby Jesus ... is one of the all-time great "Curb" scenes.
"You ate the baby Jesus and his mother, Mary!" Cheryl's sister, Becky, yells.
"I thought they were animals!" Larry protests.
"Jesus Christ is not an animal!" she shouts back.
"I-I-I thought... he was a monkey!" Larry says.
"You didn't see the hay?" Cheryl says. "The toasted coconut was hay! The barn?"
"I thought that was all part of the zoo!" Larry says. "I'll make it up to you, OK?"
"You're not gonna make it up to us, Larry, OK?" Becky shouts. "You just swallowed our Lord and Savior!" 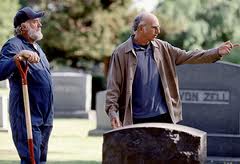 Larry returns from New York after playing a Jewish gangster in a Martin Scorsese film ... pretty funny in itself ... only to be informed that his mom died. Weeks ago. And that his mother told Larry's father not to bother him while he was busy if something should happen to her. David's reactions during this sequence is priceless.
Things get even more squirm-inducing when Larry begins using his mother's death as an excuse to get out of social engagements that don't interest him. And they take a turn for the surreal when he learns that his mother was buried in a "special section" of the cemetery reserved for "villains" and other undesirables because her husband got tattoos, which is forbidden under Hebrew law. So he plots to rob her grave and relocate her body. 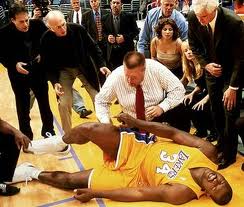 This episode is demented even by "Curb" standards. Larry David trips Shaquille O'Neal during a Lakers game, leaving Shaq incapacitated for two months, and is vilified by everyone in town. But once he hears that Shaq is a "Seinfeld" fan and resolves to bring the basketball great a stack of videotapes to make amends, his luck inexplicably changes. A car splashes a man on a curb near Larry but leaves Larry miraculously un-drenched. He arrives home to discover that his hated in-laws have abruptly decided to leave. He discovers that the team doctor who was rude to him earlier is cheating Shaq at Scattergories and tells Shaq, who fires the doctor. 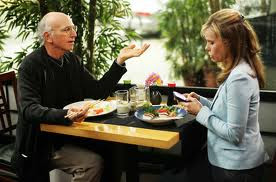 The Davids' friend Wanda Sykes tells them there's a rumor of a terrorist attack in Los Angeles that weekend. Cheryl wants to stay because she doesn't want to miss an important fundraiser, and because her vanity as an event planner won't permit her to cancel or postpone it. But Larry wants to get the hell out of Dodge.
"Let's postpone the benefit and let's get out of here," Larry tells Cheryl.

"I never thought I'd say this, but Larry's right," Wanda says, then storms out in disgust, muttering about how she's going to Vegas and did the best she could.

"Well, call me when you get back into town," Cheryl tells her. "Hopefully you'll be here," Wanda says, and leaves.

Then comes one of the great no-win-situation reaction shots in "Curb" history, as Larry hems and haws, trying to figure out how to tell Cheryl that he's leaving town without her.

"Maybe you could go where?" she demands.

"It just seems like if we're gonna go, we should go together," Cheryl says.

"Mmm, not necessarily," Larry says. "It almost seems a little... selfish... that you would want both of us to... perish."

"So you'd be fine going on without me."

"Well, it would be very difficult at first, sure... But hopefully I could, at some point, get back some semblance of a life."

Larry's expedient selfishness always gets him into trouble, but the complications are especially sharp in this episode, which finds Larry saving time en route to Dodgers game that he's late for by using the carpool lane, even though he's a lone driver. "I'm not gonna use the carpool lane by myself because I don't want to!" he exclaims, from bestride his moral high-horse. But then a streetwalker leans in his window and propositions him. "Get in," Larry tells her.

As they're driving, he negotiates a five-hour flat rate with the prostitute in exchange for having her just sit in the car during the game, then accompany him home so that he can use the carpool lane. She wants a thousand dollars. Larry balks. "That's $200 an hour." She explains that she could do four bjs in an hour, so it's a fair rate. "I drove a cab," Larry protests. "I used to drive around for four hours without a fare, you're telling me you're getting four bjs in an hour?" They go to the game together and have a surprisingly good time; it almost feels like a date. "I got us some popcorn," she tells him when he returns to his seat. "You're a sport!" he exclaims. It gets even funnier when they go to Larry's father's house to smoke a joint. The episode's punch line -- a "Seinfeld"-worth freeze-frame/photograph from the point-of-view of a traffic enforcement camera -- is one of the show's best.
at August 20, 2011

Agreed - Curb is the best comedy on TV. Season 7 was the best ever - the closest we will get to a Seinfeld reunion.