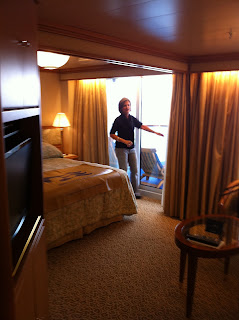 It was LOAD OUT day today.

We didn't wake up until ten o'clock. We ordered room service from ... um ... Enrique or Armando or Artemis ... I can't remember his name. He's very nice, though. All the cabin stewards have to meet strict guidelines: They must be between 4' and 5' tall, barely speak or understand English and move lightning fast (they appear and disappear within 5 seconds after you leave and return to the cabin).

It was too cold to eat on our deck ... so Debbie and I had to "rough it" inside.

After that we watched the movie about that guy and girl who raised the baby for their friends who died. We both cried ... Debbie did because it was about babies and I did because I even cry when I watch Baywatch (don't ask).

It was trivia day in the Fusion Nightclub ... so we wandered down, grabbed a paper and pencils  and joined a team of four from Seattle. I was all set to kick butt when the Jamaican crew member who was running the show told us that all the questions related to Alaska. Fortunately, the Seattle group has been on this cruise four times so I was sure they would know the answers. I was right. Debbie and I were useless ... except for the fact that she got the drinks and I looked up an answer on the internet (Insomnia ... Alaskan movie with Pacino and Robin Williams). We still came in second.

I kept my chin up and headed to the Casino. Debbie went to the Internet cafe and read. I know BORING. So here are a few pics I didn't share: 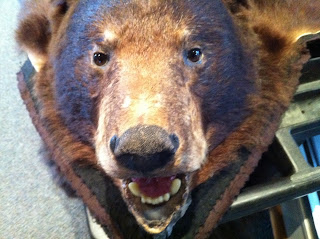 This was one of the bears we saw when we visited Mendenhall Glacier. I told him not to get up. 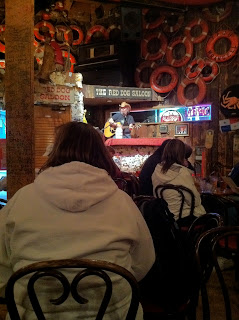 Red Dog Saloon in Juneau featured this guy. He was a cross between Jimmy Buffett and Hobo Jim from Alaska ... wait a minute ... he IS Hobo Jim. Never heard of him? We hadn't either. 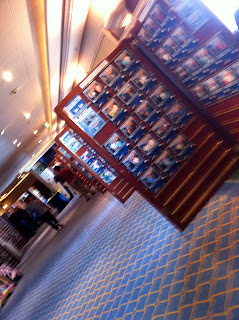