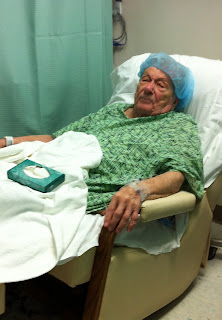 Sam had surgery on Thursday.

He had a small tumor on his bladder that was discovered last week. It was not really causing him any discomfort. For most normal people, this tumor would be painful and irritating. Sam feels no pain. He really doesn't. The man has had both triple and quadruple bypass surgery and never felt a thing.

His recovery a few years ago from a life threatening lung infection surprised the entire medical staff of the hospital. His breathing was so labored for so long that the nurses who were caring for him said it was like he was running consecutive marathons every day for a week.

On the day that we thought would be his last, Sam looked at me and said through his breathing mask, "Joel, can you turn up the volume on the TV ... I'm missing the Bucs game."

Days later, he had no memory of the entire hospital stay.

So on Wednesday night before the surgery, I talked to him on the phone.

He went right to sleep.

The next day he happily flirted with the nurses and asked lots of questions (all unrelated to surgery like ... When can I eat? What time is it? Where's the TV?) He didn't understand what all the fuss was about. He thought his procedure was supposed to be just like getting your teeth cleaned.

Soon, the orderly came to get him. We followed behind as he was wheeled down the corridor.

The orderly asked him his name ... Sam told him and asked him as well.

Linnis wheeled him in ... and an hour later ... he was in recovery. As soon as he woke up he ordered a chicken salad sandwich, chips, a coke and dessert. Unaccustomed to patients ordering full meals as soon as they were awake, the nurses scrambled to find him some food.

Obviously, he did fine. The tumor was removed and no longer a threat. Sam's back at Menorah Manor safe and sound. Well ... fairly safe ... We did get a call yesterday that he fell in the shower. When a 90 year old falls in the shower, it can be very serious.

Thanks Gillian. Same to you.