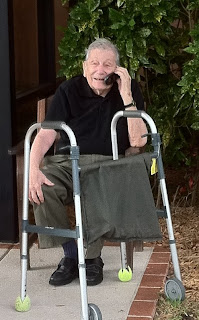 As we pulled in to pick up Sam from Menorah Manor, he was chatting on the cell phone we bought him. I was overjoyed. He really seemed to understand which end was the earpiece and which end he was supposed to speak in. Every time I called him, I only spoke to voice mail on which he gives instructions on how to leave him a message "Please leave your number at this number (which he repeats)."

"Joel ... this is your daughter Alissa on the phone."

"Here ... talk to her." He hands me the phone as he steadies himself on his walker.

"Yes ... I'm not sure I understood what he was saying (hmmm how unusual). It was something about his penis."

I hung up and caught him as he tried to back into the front seat. I helped him buckle his seat belt. He's never been able to do that ... know anyone that never knew how to put on a seat belt?

"Dad .... where's your friend that you invited to go to breakfast with us?"

"Oh her ... she's a pain in the ass. She invites herself to everything so I just told her she couldn't go."

"I did ... but I changed my mind." He thought about it. "Listen, if she should ask you ... I told her you told me she couldn't go. I made up something like ... her family would have to accompany her and you told me we couldn't do it."

Now at this point in a bizarre conversation like this ... you might ask a normal person what his thought process was. I just simply said ... "Okay."

Sammy was pretty chatty on the way to breakfast. He asked me about old pictures, girlfriends, my ex wife. This was a continuation of a previous conversation that made Debbie (and me ) uncomfortable ... which mattered not to him.

"So ... do you think you could call Carol for me and ask her to come see me?"

"Debbie? Do you know Carol?"

"Just interested that's all ... is that okay with you?"

"Yep ... hey how about calling some of Wayne's ex wives and former girlfriends."

"Oh my God (actually he was right in that one of my former girlfriends started dated women after we dated ... what does THAT say about me?) ... the things you DO remember." 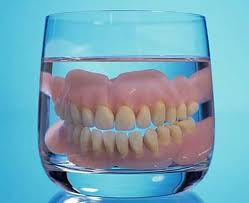 Debbie was cracking up in the back seat.

We got to Waffle House and Sam told us he has lost his appetite ... so he only ordered a waffle, bacon, two eggs, biscuits and coffee. Pretty big spread for someone without any teeth.

By the way, on a side note ... last night we saw Debbie's sister Keli at an event on the beach. She hurt her back so she was lubricating it with a few bottles of wine and advil. I'm sure she has memory loss this morning.

When I stopped by her table to say hi to Mark and her ... she whispered to me that she was disappointed that she had a croissant and the rest of the table had buns. "Did you have the buns at your table too?"

I looked at her plate ... "Keli. Did you get the croissant from the table?"

"Yeah ... right over here." There was one other croissant sitting in front of her.

"Don't eat it. It's the table decoration. The buns are in the basket over there."

Joel-- you and Debbie are saints, and Sammy is just adorable! OMG.. Hey I get his "excuse" for not taking the friend out for breakfast. In my travels to the long term care facilities the women out number the men in massive numbers. So Sammy is probably a "chick magnet!!!!" He needed a break! LOL... :) Sharon