Gimme a Head With Hair

Albany, Georgia was next.

I found out that it was actually pronounced "AllBenny" ... if you were a native or had a speech impediment. The school to which I was assigned was Deerfield Academy. I found out that students AND teachers alike had a dress code and was told by my boss at Readak that I had to get a haircut. Now ... my hair wasn't that long ... at least it wasn't down to my shoulders ... but it was considered very long by their standards. Hair had to be cut above the ears and could be a little longer on top.

Something snapped inside of me when I was ordered to get a haircut.

I know you're thinking ... it's just a haircut ... not a big deal ... just GET a haircut. It'll grow back. Well ... it was a big deal to me. Why? Maybe it was because I was feeling rebellious ... after all, the Beatles were just coming of age, it was the Age of Aquarius and Jim Morrison had recently died. Maybe it was because I was fed up being pushed around ... I had spent a year of intimidation with large black students in South Carolina, escaped near frosbite in Gary and suffered the humiliation of getting busted in Michigan City for a crime I didn't commit.

For whatever reason ... I wasn't going to take it anymore! No haircut for me. I was going to teach them all a lesson (THEM ... you know ... all THOSE people). I had a brilliant idea!

I bought a wig.

Yes ... I bought a short hair wig. Every morning I would stick my hair in a nylon cap and cover it with a goofy little wig. I'd show them ... it was hot and uncomfortable and looked really stupid ... but I felt empowered.

Carnal thought it was stupid.

She was in between assignments and stayed in AllBenny with me for most of my teaching term. What I didn't know was that she was a cat lover (I wasn't). I found that out when I came home one day and found a little white kitten crouched in the kitchen in front of a silver bowl of cat goodies. As I walked closer, the kitten arched her back and hissed at me. Carol had just gotten home as I hopped out the door screaming like a little girl with he cat attached to my pants just below my crotch.

Apparently, this kitten was a stray ... Carol felt sorry for her and had been feeding her while I was gone. I refused to have that killer in the house so she remained outside after that. Every morning when I left (I kid you not) that kitten attached herself to the screen door, and intimidated the hell out of me. She couldn't have been more than 12 inches long.

My saving grace was the school. The students were great at Deerfield. They were very open and honest with their feelings. I realized how much they cared on the last day of my term.  As my last class ended ... a small group hung out at my desk and really didn't want to leave. Finally one of the girls, Amy, spoke up ... 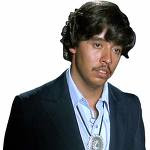